Back in 2013, I invited readers of my blog to identify this mysterious looking map, below. 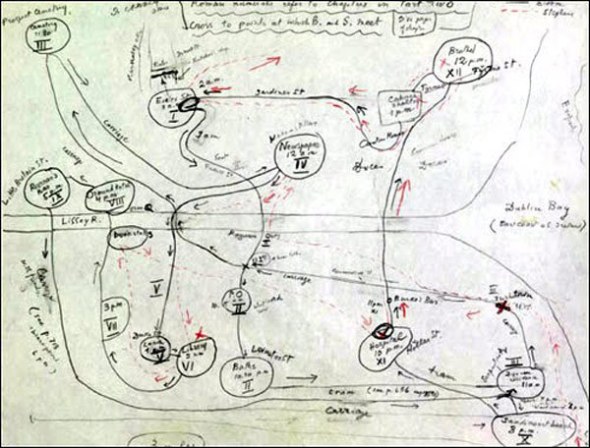 As many people either knew or guessed, it’s a sketch concerning Ulysses, the legendary novel routinely claimed as the best or most influential tome of 20th century literature, and written of course by James Joyce (below). 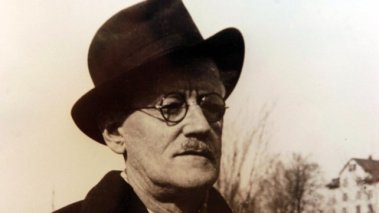 I had come across the drawing a few weeks previously, while researching my walking routes around Dublin,  routes which often reference that iconic novel, Joyce’s work in general, and indeed places that featured in the writer’s own life in Dublin.

As one or two readers also knew, this particular map was drawn- presumably as an aid to study- by another great novelist, the Russian writer Vladimir Nabokov, of Pale Fire and Lolita fame.  (pictured below) 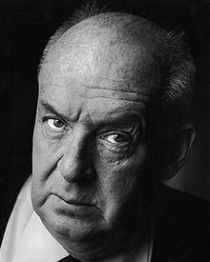 Like many 20th century writers, Nabokov was greatly influenced by Joyce.  Indeed, he was not adverse to some Joycean playfulness in his own work.   Take for example, the fictional forward to Lolita, purportedly written after the death of fictitious anti-hero and pederast scholar Humbert Humbert.

As for Nabokov’s pencil map/drawing above, it follows the voyage of Bloom around Dublin during the novel.   But to help us understand this “mind-map” and specifically the small pencil numbers written on it, it’s worth noting that Nabokov is only concerned here with the peregrinations of Leopold Bloom on Thursday, June 16 of 1904.   In other words he is not following the other journey in the novel,  of Stephen Daedalus, that same day.     So, for example, because the first three episodes of Ulysses: “Telemachus; “Proteus; “Nestor”; ( the three episodes collectively termed the Tellemachid) all concern Stephen Daedalus, and not Bloom, they’ve been disregarded here by Nabokov.

Conversely, Leopold Bloom, although the hero, doesn’t appear until the fourth chapter, or, more correctly, the fourth episode (called Callypso)  In fact we only meet him quite far into the book, getting up out of bed in the house that he shares with Molly Bloom, at number 7, Eccles Street in Episode IV.

Accordingly Nabokov only starts noting and numbering episode from this point onwards, using those small Roman numerals scrawled in pencil on his map. (Nabokov’s map pictured again below)  So in other words, in Nabokov’s system, episode 4 is numbered 1.    So “Callypso” is denoted as I, not IV.  Likewise Bloom’s second episode (Lotus Eaters) is II not V;   and the sixth is IV (not VII).   And so on.

This can get difficult.   Especially by the time Nabokov gets to the episode called Sirens.   “Sirens” sees Bloom having dinner with Stephen’s father Mr Daedalus, in a hotel following their return from Paddy Dignam’s funeral, and listening to music there.  (In fact the entire episode is constructed along musical lines).  This is Chapter 11 of the novel, but in Nabokov’s system it is only 8: VIII.  That proved very confusing, for me at least, because it takes place in a hotel. (the old Ormond hotel, on the Quay of that name) while a substantial part of the “real” chapter 8/VIII (Lestrigoninans) also features a hotel: the Burton hotel.

If you look closely, you’ll also see that Nabokov had named our National Cemetery “Prospect Cemetery”.   This may seem like an error to some, since most Dubliners know the last resting place of Parnell, Daniel O’Connell et al as Glasnevin Cemetery.   But this is no mistake either.  Mount Prospect was and apparently is still is the official name of Glasnevin.  They are one and the same place.

It is very rewarding researching a walks of Dublin. One is constantly truffling about and turning up new morsels, like this wonderful map here.

I think I have heard it said that most great writers are also great readers,  meaning highly attentive, highly engaged readers.  Nabokov is a dramatic case in point.  It appears the great Russian was seeking to create a mental picture of the city, and the crisscrossing of routes that take place within Ulysses,  and was even perhaps, trying to test and calculate journey times to test and to fix a sense of time in the novel.   Even more, Nabokov seems to have been trying to form a more three-dimensional, more spatial understanding of the novel, and the city.

That is a worthwhile pursuit.  Rewards lie in wait for the serious student.  The novel is full of games and tricks.

One amusing challenge, set by Joyce to his readers was to contrive a route through Dublin that does not pass a single pub.  Believe it or not,  that riddle was only cracked a few years ago, in June 2011, by mean of an algorithm written by one Rory McCann, a 27-year old Irish software developer.

Separately, a few years back, a team headed Professor Joseph Nugent, Professor of English at Boston College, and his technologist collaborator, Dr. Tim Lindgrin, created a wonderful interactive map of the Dublin of Ulysses.  sadly that project has been “retired” and is no longer interactive.  But while it was up and live, their fabulous map could be scrolled around,  and searched, by chapter or by episode, or by reference to characters, to buildings or events.     Granted, the annotation provided by Boston College team was by no means complete or exhaustive.   But their map was still undoubtedly a wonderful, useful, immersive resource for all students of the novel.   It certainly helped us in a greater understanding of that novel, in a more spatial, more, 3-dimensional way.   All of which, I’d venture, also assists us in turn to a more temporal understanding of Bloom’s  (and Stephen’s)  experience as well.    Their lived, felt, breathed, experience, minute-to-minute, of the city, what they see, who they meet, everything.    Simply knowing where they are helps us to visualise what is physically around the next corner, or over the next bridge, and this to give physical context to each meeting, thought and incident that occurs within the book.

Meanwhile,  the same map resource,  also, certainly,  helps reveal some of the strange games Joyce was playing….   Let’s just look at one example below.    Have a careful look below, please, at this section of Dublin, walked by Leopold Bloom in the episode Lotus Eaters.

Please ignore the red lines on the map which are irrelevant to the novel:  concentrate instead on the thick BLUE line, which is Bloom’s walking route.

Now have one really good, long look, and try to identify what you can see”  (?)

Did you see above how Leopold Bloom’s route, appears to form at least one,  and maybe even two,  question mark shapes, on the map?

This is something we would or even could realise, until or unless we see Bloom’s route traced on a map this way.    Yet, despite this “hidden quality”  the question mark shapes are almost certainly no accident.   On the contrary, Joyce revelled in such diversions.

But, why have a question mark, you might ask, in this specific part of the novel?   Well, probably (scholars have suggested)  because Leopold is on his way to collect and to read a letter.   His wife (Molly)  is having an affair of course, with the jaunty or even cocky character of Blazes Boylan)  But so is poor Bloom himself, involved in a less satisfactory, in fact rather half-arsed, furtive sort of “relationship”  one which seems to place almost entirely by letter.    In fact, as I understood it there’s the impression poor Leopold is even the victim of a sort of “Romantic letter” confidence trick, and is being milked for cash.    But in any case, this is not relevant at this point.  What matters is that Bloom wants the letter badly and is one his way to collect it and then to read it.   So, he is excited, burning with curiosity,  agitated, even aroused.   He wants to know:   Will the letter be there?  – and – What will she say this time?     Hence his route, forming “questions” on the map.

In later 20th century literature,  other writers, like the Oulipo group in France, were inspired by Joyce to play out similar games- notably the singular, endlessly playful genius of Georges Perec.   (below) 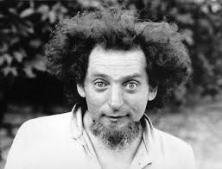 Perec’s greatest novel, “Life: a User’s Manual” features an invisible eye, wandering around a block of Paris flats.    But each move through the apartment block follows the L-Shaped movement of a knight, from a game of chess.

It’s an apt device, in a dazzling novel packed with plots and ploys, and where the clef for this very special roman is a cruel trick, played out by means of an other puzzle,  a jigsaw puzzle. 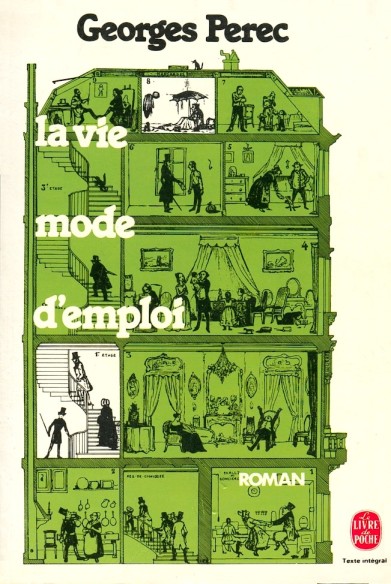 As for Mr. Joyce, he boasted, famously, that we would  all be studying his novel for a hundred years or more.

Even that may turn out to be a cautious estimate.

If you would like to join me on one of my walks around Dublin some time, we organise two types of walks.  the first is public walks, on fixed dates, that everyone can join in, but these only happen 2-3 times per month.  And we also also supply private tours, that you can simply buy off the website, by pressing our famous green  “Buy Now” Button.

All the information you need, and that green button,  is on our other website, Dublin Decoded (dot com)    You’ll find walking this great city is the best way to learn about it.   Even better than drawing a map, although we use those plenty too!  We hope to see you some time in Dublin.

Thank you for visiting and reading.  if you enjoyed the piece above, please leave a comment.   It’s always nice to hear from readers.

the official website of cult US writer Chuck Palaniuk turned out to have a pretty good introduction to Perec’s wonderful book Life; A User’s Manuel.    Or best of all of course, read the book yourself.  You’ll never regret it.

See the website Socks for a wonderful collection of maps, diagrams, photos, postcards and other art works connected with Perec’s novel.

And finally, here’s the link to the excellent Boston College mapping Ulysses project.