Regardless of what you choose to call it, it was painted around by 1620,  by Flemish artist Peter Paul Rubens.

Rubens (1577-1640) who was born and lived as a child in Germany, but essentially came from Antwerp (in modern day Belgium) and is one of the most iconic artists of any era of art history.  His utter, highly fluid mastery of oil paint, (influenced in particular by his study of Titian in Venice) his dramatic, flamboyant use of colour;  his innovative swirling, dynamic compositions,  all made him simultaneously recognized as pioneer and a highly respected artist in his own lifetime, constantly in demand by the most powerful and prestigious clients of the time, including Popes and Kings.

Some of his smaller, more intimate works were painted entirely by Rubens himself.   Such as the lovely, tender portraits of his first wife Isabella Brandt, and their children, or of his equally-loved second wife, Héléne Fourment    (Brandt died in 1626, Rubens married Fourmet four and half years later)

But demand for his larger, narrative work was such that it could only be met with a highly evolved studio-system, employing a veritable army of assistant painters.

Some of these assistants were apprentices; while many others were highly skilled specialists or even masters in their own right, up to and including such luminous names as his friends and collaborators Jan Brughel the Elder and the animal painter Jan Synders, not to mention Ruben’s most famous and successful pupil,  Anthony Van Dyck.

These larger works were produced using a system of production very like a modern factory assembly line.

During this process, Ruben would design the overall work and execute preparatory drawings or sketches ,  sometimes an oil sketches other times in grisaille;  (a monochromatic paining in shades of grey.)

The sketch for Fall of the Dammed,  for example, is in red and black chalks, covered in a grey wash.  This now lives in the British Museum in London.

After these preparatory drawings of the master were complete  (and they are themselves often works of great beauty) another artist, or group of artists then transferred the composition onto a large canvas,  already stretched and prepared with gesso, by more lowly assistants or junior apprentices.

Then, yet more painters would colour in the lines, others paint in the  landscape, yet others paint the architecture, or the folds of drapery, others flesh and skin tones.

Different artist might even work on human hair, another on the fur of a fox or rough mane of a lion; the plumage of a bird, the gleam of silver; gold; glass, the dusty skin of a grape and so on, and of course each of these artist was one who had huge experience and virtuosity in exactly that area of depiction.

Indeed, if you’ve ever gasped at the sheer, outrageous virtuosity of Dutch or Flemish art from the 17th century, (and let’s face it, who hasn’t?) and even wondered just how on earth they achieved it, this level of highly concentrated specialization forms part of your answer.   Allied of course, to an incredibly rigorous apprenticeship, study and training process in the youth of each artist-painter.

As you’ve gathered, Rubens was, it goes without saying, incredibly successful.   Arguably, he’s the most successful artist of all time, when you valance the different senses of that term (critically, commercially, even in terms of reputation and prestige)   During his lifetime, he painted for everyone that mattered.  For art historians today, he remains synonymous with Counter-Reformation art and imagery in his era.  So his place in the pantheon is assured forever.

His name has even entered the English language, (the ultimate compliment this, for any artist or writer) by way of “Rubenesque” to describe the generously- shaped women he personably delighted in.

As if all that’s not enough, in his own lifetime, Rubens also enjoyed a reputation of an accomplished diplomat and humanist scholar, of genuine substance.  And at a time when Europe was tearing itself apart, in the most barbaric wars of religion, he was entrusted with important diplomatic missions, first in Italy, then later between protestant England and catholic Spain, getting knighted by Charles I of England and Phillip II the king of Spain for his services.   He is Sir Peter Paul Rubens, twice over.   At a time when painters did not yet enjoy the same prestige as, say poets or scholars, (their work suffered the slight “taint” of manual labour) this was all extraordinary stuff.

I’m not crazy about every Rubens picture. The vast, endless, Marie de Medici cycle (today in the Louvre) is an unmitigated piece of aggrandizing political propaganda, with a level of craven, fawning flattery and crawling toadyness surely unmatched elsewhere  in the history of great art.

Some of his hunting pictures (he did many) I also find vaguely sickly.  One such painting at the Alte Pinakoteck features a group of “exotic” horsemen sticking spears into a hippo, while their giant mastiffs launch themselves at a crocodile.  (Another dog chews at its reptile tail)

Apart from the lack of compassion for animals, (which admittedly, was unheard of at that time) the whole thing is just so daft and silly.

But hey, many of Europe’s wealthiest clients liked nothing more than a dam good hunting scene, (a symbol and demonstration of masculinity and virility) and some liked it with dash of “the exotic” too.   Rubens, the consummate businessman, was it seems, always happy to oblige.

This, however, “Descent/Fall into Hell” I mean, is my favourite Rubens, from any museum in the world. 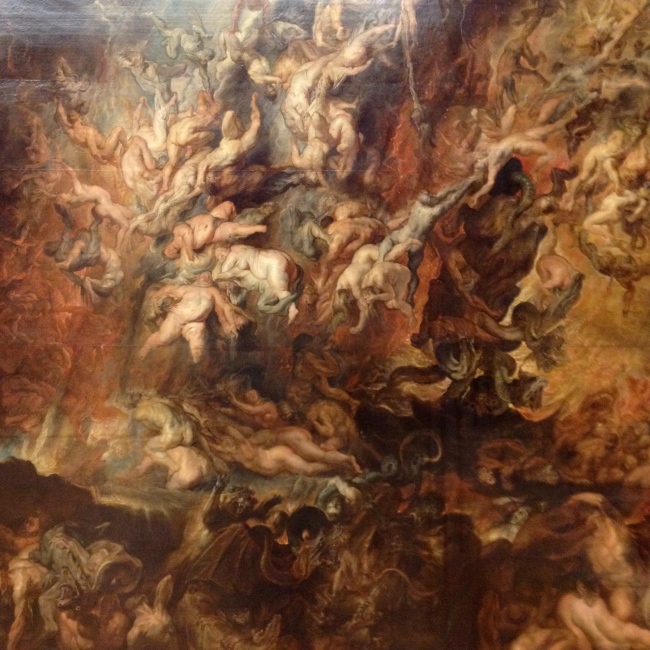 I love the crowded yet controlled brilliance, the complexity yet simplicity of the composition.

Complex in such an abundance of human form and details, so rich in variety of imagination.  Observe, for example, the sheer variety of devil-types.

But simple in another sense, as all the figures are more or less equally “weighted” – none push forward or recede into the background.  Instead, they all exist more or less in the same level of the picture plane, a cascade of tumbling humanity.

The three large people seen here in detail are so extraordinary.

They put one in mind of Jenny Savill’s monumental nudes, or Lucien Freud’s portraits of the performance artist Leigh Bowery.  (Both British artists, surely in debt to Rubens?)

One has to presume these three full figures are guilty of the cardinal sin of gluttony (don’t you reckon?)   Now unfortunately they are being cast down into hell for that transgression, which frankly seems a little harsh.

Yet there’s none of the occasional indifference or brutality one can find elsewhere in Rubens’ work.   On the contrary, I find these three large extremely sweet.   It’s hard to believe the artist painted them without some level of affection.   He just liked big people, basically, loved skin and flesh and weight and mass.

There are hundreds of Rubens all around the great museums of Europe, not least in the Alte Pinakothek.

But the great Fleming’s touch of humanity,  allied to the difficult, complex, and dynamic composition, his dazzling yet subtle use of colour and play of light across bodies that fall through space, make this particular work a true, unmitigated masterpiece.

I have to say here now, that everything I know about Rubens, indeed about Art History in general, comes, firstly, from my old teacher at St Gerrard school, the late Mrs Deverauux, and then from the amazing department of Art History at Oxford Brooks, where I was lucky enough to study, many years ago.  It was an extraordinary department.  One of our tutors was Jeremy Woods,  a Rubens scholar, and editor and author on the Corpus Rubenianum Ludwig Burchard,  (29 volume set) catalogue raisonné:  essentially, the definitive work on Rubens.  The same department included Charles Robertson, who advised the Vatican on the Sistine Chapel restoration, and the Head of department when I started there was the late, great Irish Art Historian, Jeanne Sheehy.   This post is dedicated to them, to Dr Clare Tilbury and to everyone else in the Art History Department of  Oxford Brooks.   I thank you and I salute you.

I plan to start posting soon a short series of pieces on terrific paintings here in Ireland.  I hope you’ll join me then.   Or if you’d like to simply join one of our unique,  sociable and highly informative Dublin City History and Art tours, go to Dublin Decoded  to see the tour menu and then hit an individual “tile:” to see more information.  Rave reviews and new testimonials, of both our Dublin History walking tours, and our famous How to Read a Painting workshop (twice a month at the National Gallery of Ireland)  appear regularly on TripAdvisor.  Reviews can be seen here.

It if also possible to book a private tours,  on any agreed date,  of any of the Dublin Decoded tours.  Simply send an email anytime, with your preferred dates and choice of tour/tours please:  to  dublindecoded@gmail.com   It is of great help if preferred dates and prefered tours are in a subject header, to ease further correspondence.

If you would like to receive notice of scheduled tours, to which all and everyone is welcome, the best strategy is to join the mailing list for our monthly newsletter,  where we announce all up-coming walks and tours.

4 thoughts on “Falling into Hell. Peter Paul Rubens at the Alte Pinakothek, Munich.”