I don’t know about you, but I tend not to go back to places I lived (and loved) in in my 20s.  It’s too nostalgic, too sad somehow, amid the footsteps, the ghosts of your former, younger self. I was apprehensive anyway about the prospect.  Yet it was amazing, especially as I’d not been at all since all those years ago.

In fact it was great.  For one thing, I’d forgotten quite how spectacular everything was, and remains.  Here is a massive 20 foot high, multi-ton, solid bronze pine cone, from ancient Rome. 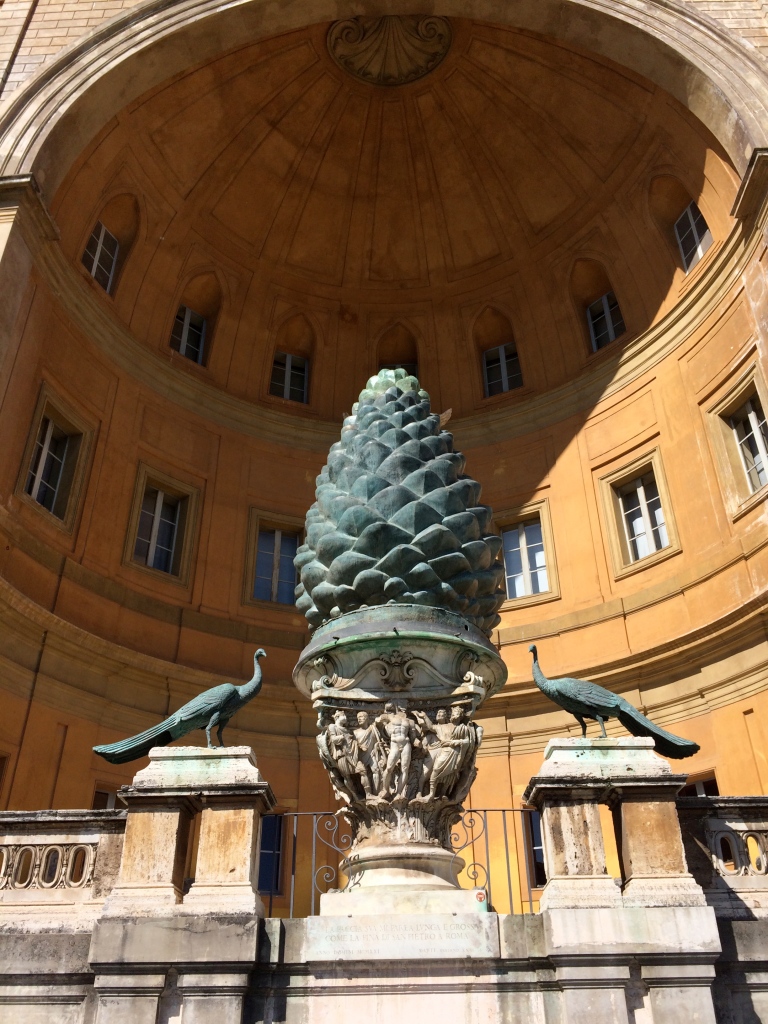 Now it sits in the Vatican, framed by a huge towering niche, designed especially by Donato Bramante, or is it Michaelanglo?

and yes, “remains spectacular”. To my slight chagrin, the Eternal City had not noticed my departure two decades back.  They had not rearranged the public spaces.  Nor put up a single statue in my honour.  I’m quite miffed bout it to be honest.

I wondered if this might be in my honour.  But no, on closer inspection it turned out to be a “River God fountain” and Obelisk, sculptures by by Bernini, Piazza Navonna. 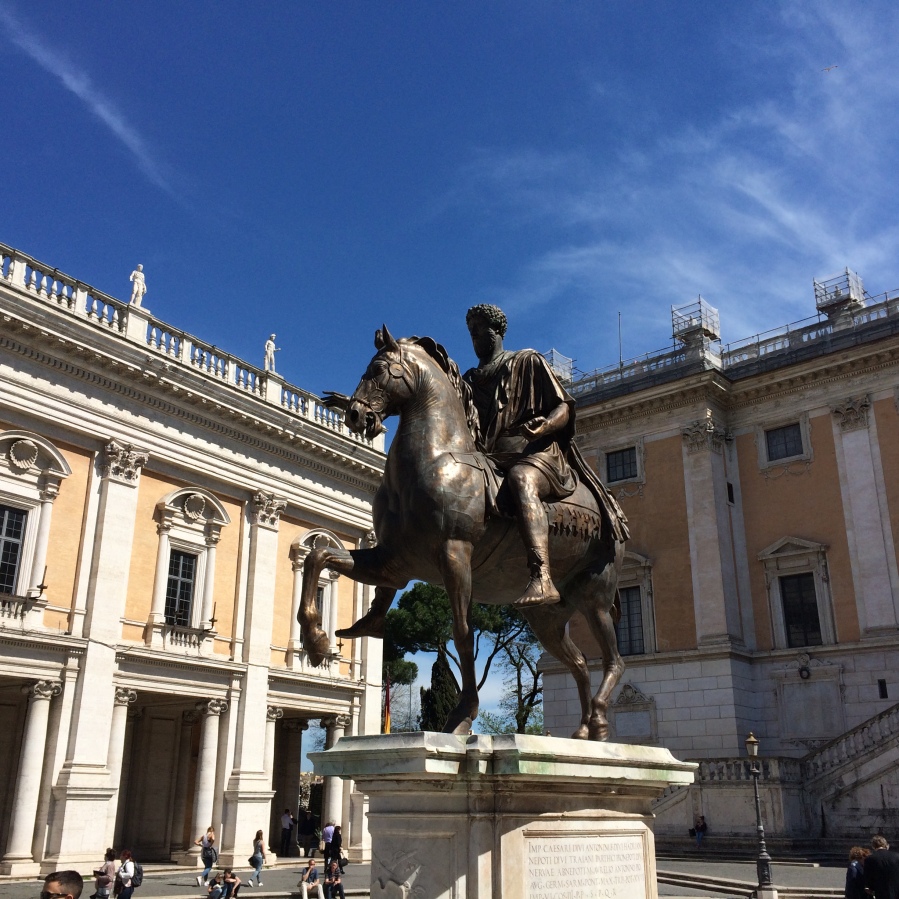 This is not me, but that Marcus Aurelius chap. 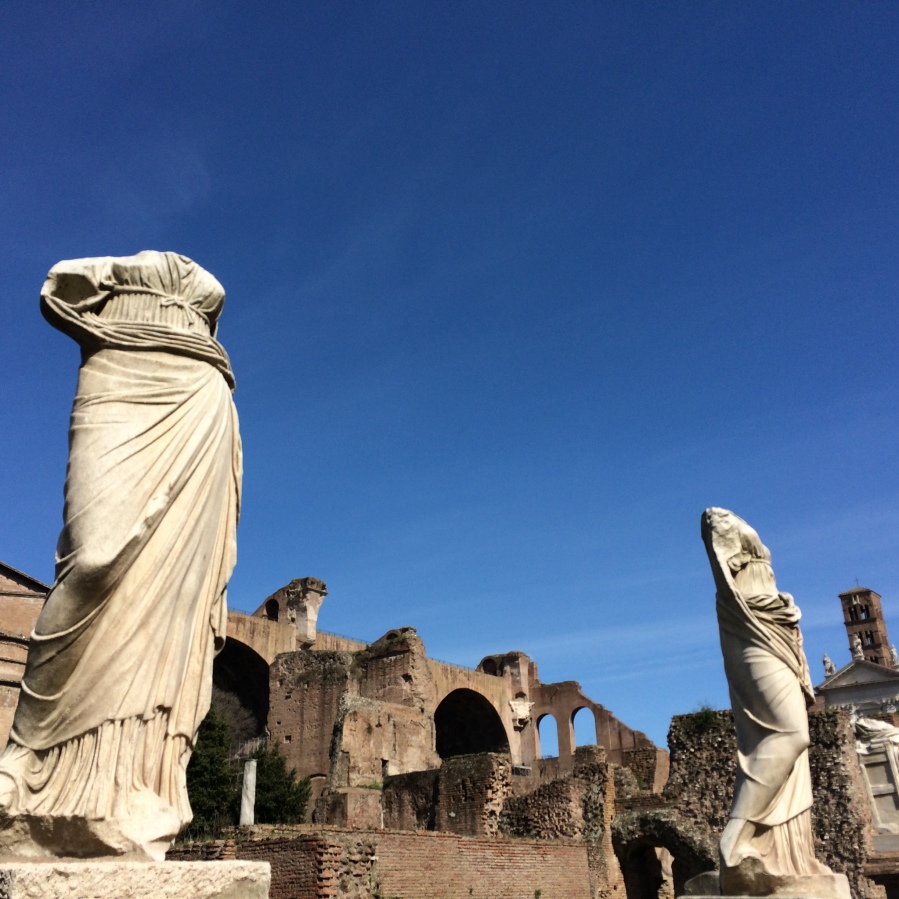 Vestal Virgins, amid the Roamn Forum.   Definitely not…

Nothing at all.  Everything is quite as it was, albeit with a multiple of other tourists. For I am now a tourist too of course, merrily snapping away. 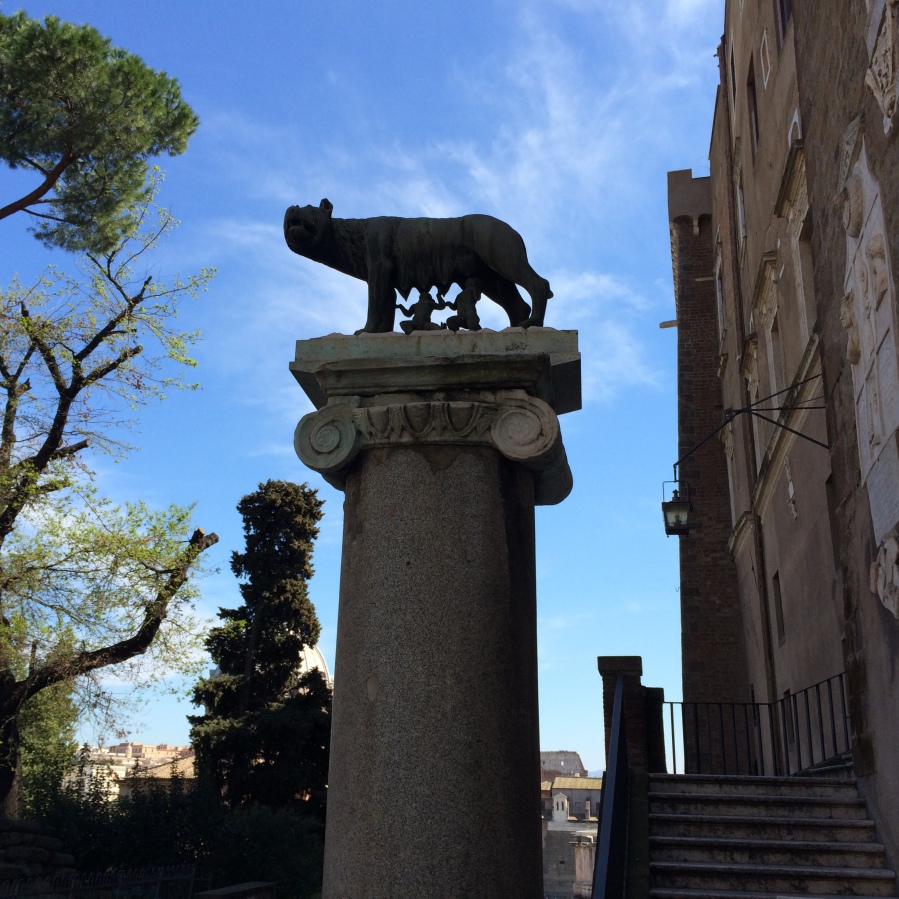 But a very happy tourist. Talk of spectacle.  The Vatican collections for example, inside and behind this well known church.

The quality of the art works is, of course, ridiculous, the collection unlike any other.

Unlike anything else on earth in fact, because it combines the ultimate of quality with extraordinary quantity as well. There are miles of masterpieces, acres of legendary fresco, iconic Greek and Roman statues, by the mega-ton-load.  All of it vast, all of it superb. Beyond superb, indeed superlatives.  (Although heaven knows, I’m doing my best here) 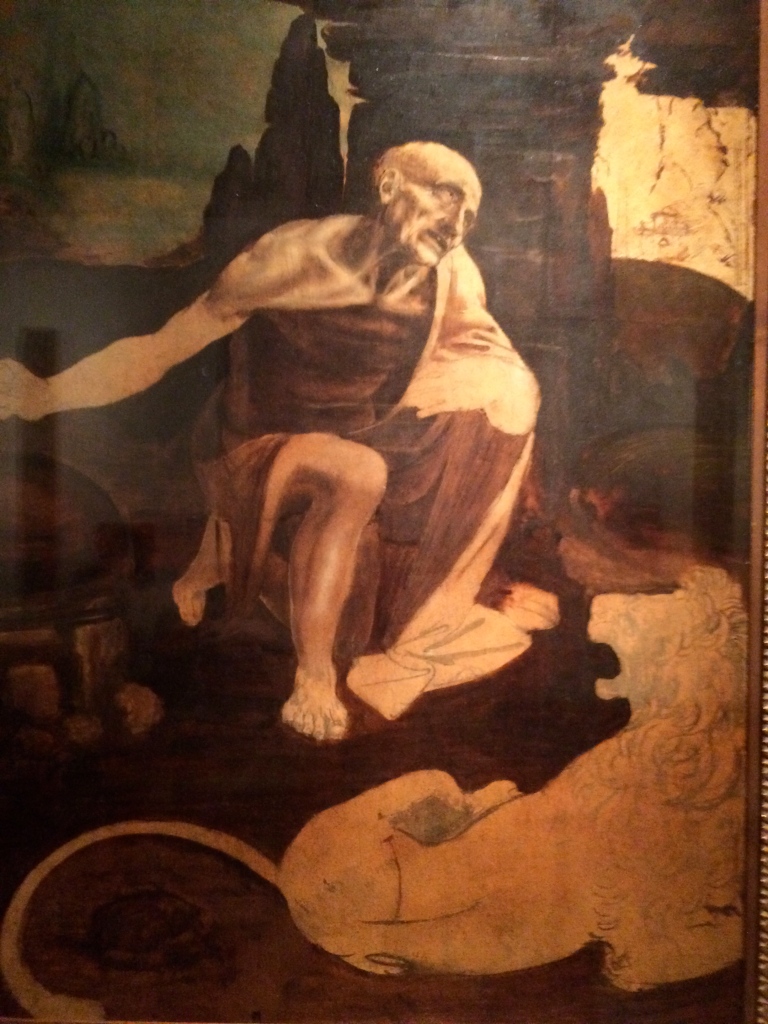 directly above, Leonardo, St Jerome.  (partially unfinished oil painting, and the better for it) Above that, School of Athens, Raphael, above that, Sistine Chapel, (the ceiling) Michelangelo. He painted the gable wall as well of course,  in a separate work, sevral years later, the Last Judgement, below. 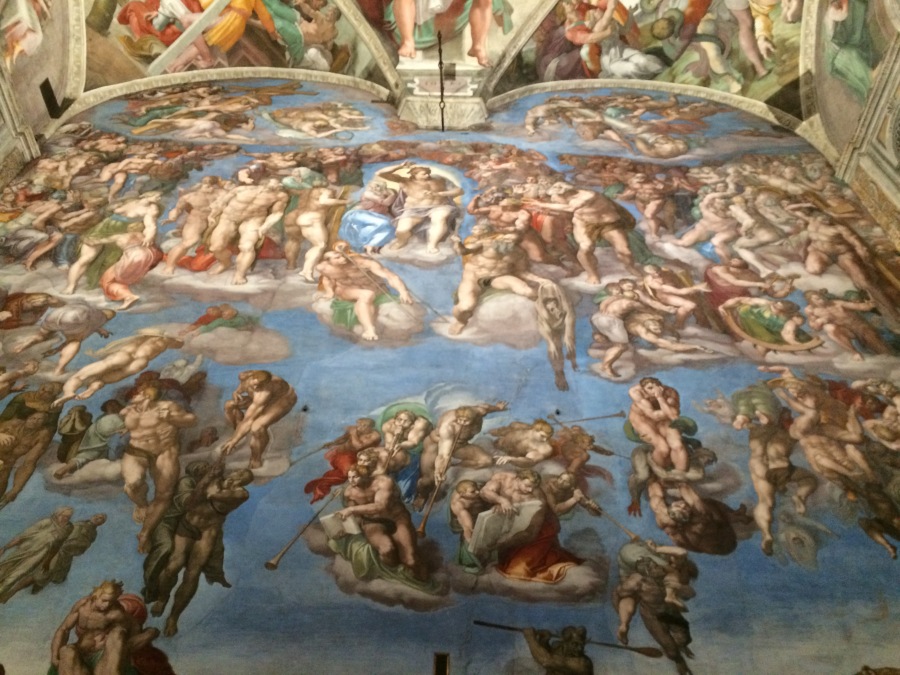 Again, to labour a point, we’re not merely speaking here of artfacts well known or famous.  But icons, celebrated as seminal; central, and at the very apex of western art. Yet one after the other they come, each gob-smacking in its impact, miles of them.

This sounds like a truism I’m aware. Banal even, coming from a supposed art historian. But sometimes one gets jaded, then comes full circle. Sometimes it’s important to state the obvious.

Take this sculpture below for example. It’s the Torso Belvedere, an ancient Roman statue. It was legendary in the Renaissance (and deeply influential on artists then) and has been ever since. 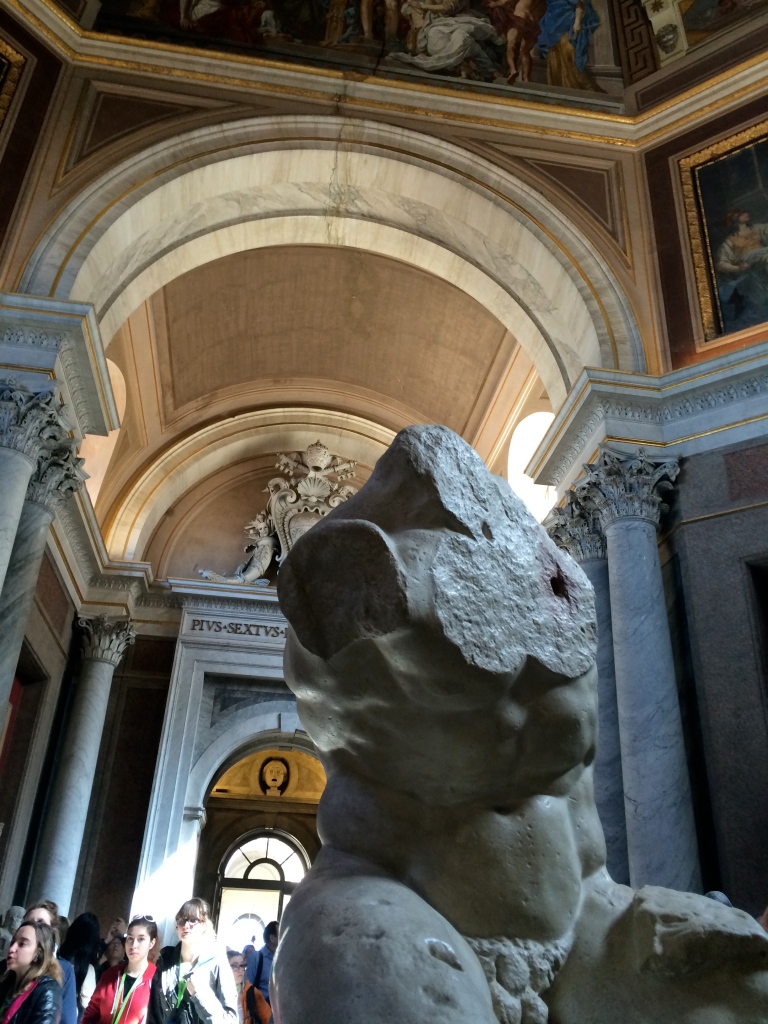 People stop and look at it a while. (God forgive my cynicism, but I suspect because the guide book tells us to)   Very few look up at the ceiling above, which looks like, this… 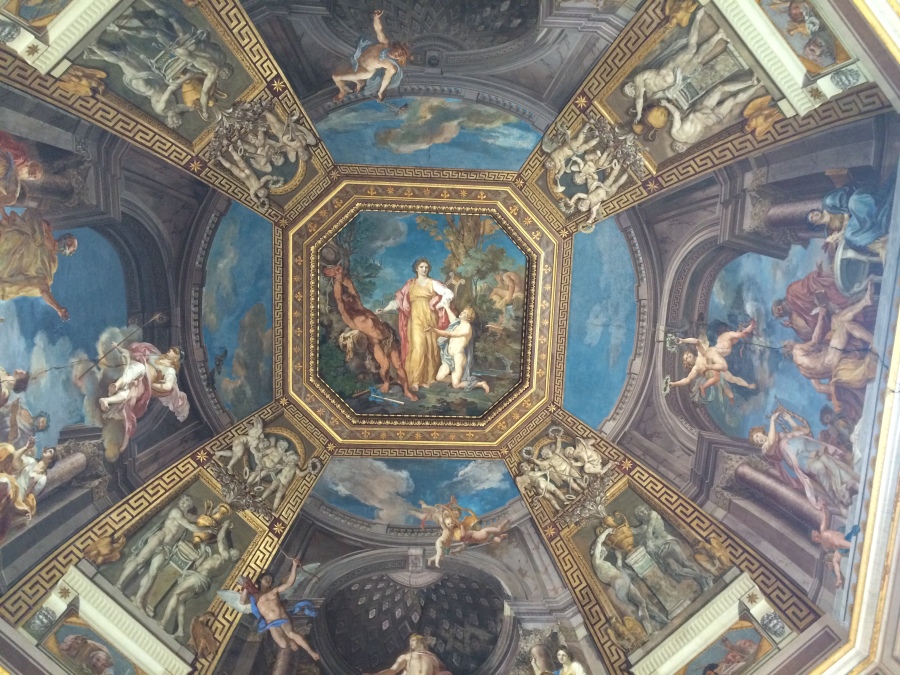 Here’s another ceiling that we all ignored.

This one is in the famous gallery of the maps, the Galleria delle carte geografiche.  Which is stunning, and which are (the maps) utterly compelling.  They are by the friar-artist, Ignzio Dante.  There are dozens of them, on both sides of the very long corridor, with and below the incredible ceiling nobody looks at.  Each map is enormous, maybe 2.5 x 2.5 meters each,  and not only are they beautiful, virtuoso objects in themselves, and extremely accurate for their time.  But each is full of lovely details, curlicues and flourishes…

We were especially happy and intrigued to see this one, below, as its of the lower southern half of the Puglia region, the Salento peninsula, which was to be the second half of our holiday.  (We went by train 2 days after the Vatican art-orgy, both the train and the region especially highly, effusively, recommended.   I hope to post about the Salento in a couple of weeks, God willing)

So, given the great beauty of the maps below, I don’t blame people one bit for not looking at the ceilings above.  But just I wonder how long it took to paint, this ceiling, and how the artist or artist would feel now if they knew how utterly ignored it was.

That’s the problem with the Vatican, there is art literally everywhere.  And it’s all, all of it, superlatively good.

Here’s the Laacoon,  and the Apollo Belvedere. 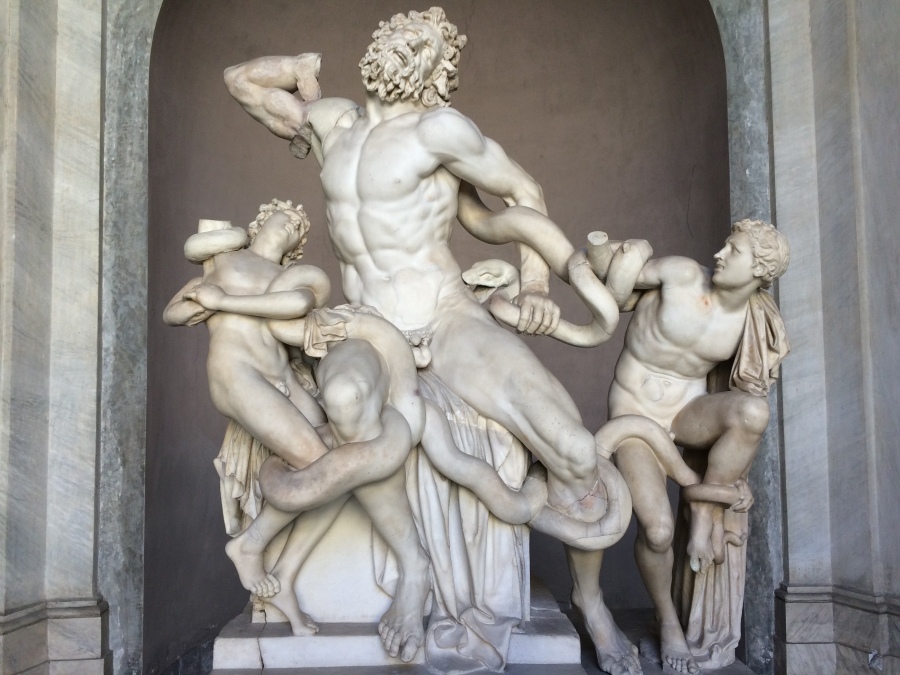 Here is a ancient Roman sculpture head of the Emperor Hadrian and his erm, very close friend, Antinous.

They are,  both of them, very famous sculptures.  But the one of Antinous in particular  inspired an important 18th German critic called Jochaim Winckelmann to write enthusiatically of the white, sheer stipped down beauty of the antique, classical world of art, in a book that was immensely influential at the time.  In fact Winckelmann is considered one of the “fathers” of Art History, as a subject of academic study.   So that handsome marble  head is not just part of the History of Art.   It’s part of the History of the History, of Art.  If you get my get my meaning.  That’s the Vatican for you:  everything is wow, gosh and blow me down with a feather.  And a little knowledge is a dangerous thing.  Because the more you know about it, the more “wow” it all gets.

I’ll leave you with two more pictures of that ceiling that nobody, ever, can ignore.  Although there are other works, by Benozzo Gonzzoli, Perugino, Domenico Ghirlandio, and Sandro Botticelli,  (yes in the very same room, the S Chapel)  – that nobody even glances at. 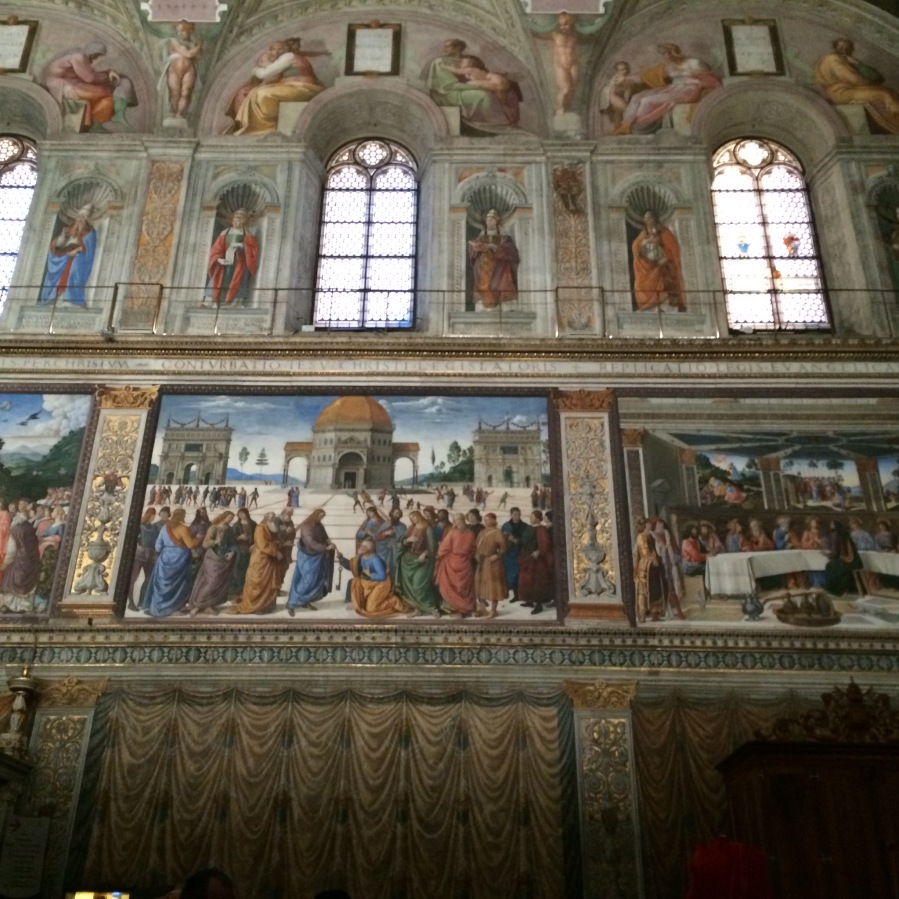 Here’s that ceiling one more time.

Thank you for reading.  We’ll be back next few days, with news of our Dublin Decoded walk, remembering the First World War in Ireland, a historic walk and conversation,  with a lovely concert too if you buy the combined version of the ticket.    If you’re in Dublin that Sunday soon,  April 19th, please be sure to come along.  Walk is at 2pm, Concert at 4.30.   All details are on that link.   But it would be a pleasure to have your company.

all the best for now.

13 thoughts on “Postcards from Rome. Maps of Rome.”