a stone carving from a capital that adorns a column in Saint Brendan’s Cathedral, Loughrea, Co Galway.

The Cathedral was designed by William Byrne and funded by the wonderful Edward Martyn,  Catholic land-owner, Humanist, scholar, patron, and playwright.

Martyn was an absolutely vital figure in Ireland’s Gaelic Revival,  a hugely important benefactor to the arts.  Among his many other accomplishments he was a co-founder of the Abbey theatre, and indeed he also introduced to each other the other two founders- Yeats and Lady Gregory. 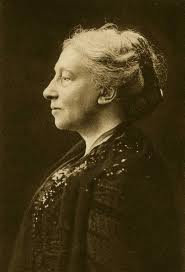 Martyn, a very wealthy man, also funded the Abbey, nursing it through the first three years of life to ensure its survival.  He helped establish & fund the Palestrina Choir of the Pro-cathedral, the Feis Ceoil movement, for Irish song, music and dance, as well as acting as organizer, and benefactor to Irish-language theatre groups, and a famous stained glass workshops.   His input therefore,  was vital to the Irish wing of the Arts & Crafts movement and this is particularly true, and evident,  at Loughrea.

There artworks including stained glass by by Evie Hone (assisted by Beatrix Elvery) by Sarah Purser; Patrick Pye, and A.E. Child, and some spectacular, really extraordinarily, vivid, detailed and ornate windows by Michael Healy.  Many other artists are also represented, including banners embroidered by the Dun Emer guild, designed by the painter Jack B Yeats and his wife, Mary Cottenham.     From just slightly later comes a simple modernist altar, in black stone, by the architect Michael Scott.  (Scott was also responsible for the lamp and rails around the cathedral) 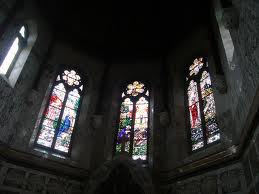 above:  stained glass windows at Saint Brendan’s Cathedral at Loughrea.   Martyn not only paid for these individual windows,  he paid for the establishment of an entire stained-glass workshop, thuis reviving the craft and artform in Ireland and helping bring through generations of craftsmen and women.    The window to the right, above,  is Christs Ascension,  by Michael Healy. 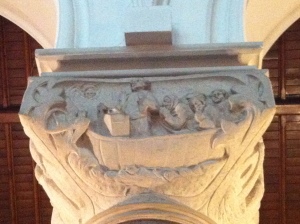 The stone work is by sculptor Michael Shorthall.

In the detail above (& top)  we clearly see Brendan himself,  on his fabled voyage across the Atlantic.    It would have been a long, terrifying and hazardous journey in the small boats of that time.   But using the prevailing winds is more than  possible that Brendan made it,  a point demonstrated by the famous Tim Severin re-construction of 1976.

There is no doubt that Brendan and his monks gave accounts of their trip, and that these were written down,  endlessly copied,  and re-told.   Brendan was internationally famous.  Here below you see him in a 16th Century Ottaman map, (the Piri Reis map of 1513) 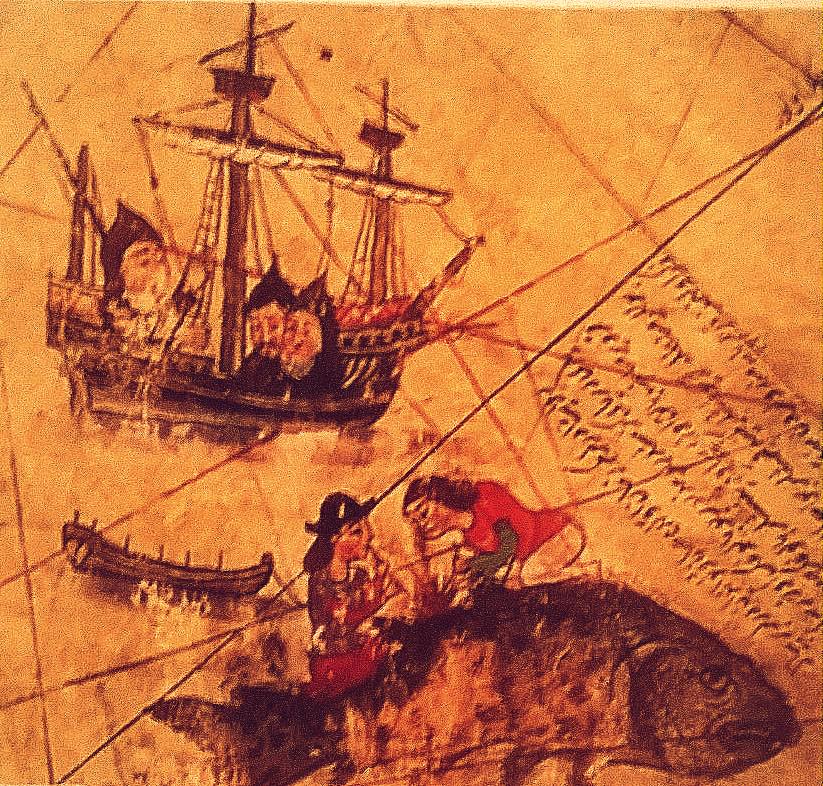 But his fame went back much further than that.  In Ireland since his open lifetime and, internationally, to the 9th century, when the legends or accounts had been collected into a single volume and spread across Europe, becoming wildly popular.  Here are some woodcuts which illustrated that account, these ones from a German edition. 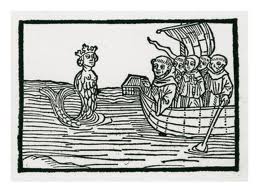 above:  German illuminations,  showing episodes from the Voyage of Saint Brendan. 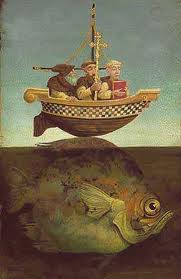 Not only that.  but  giant crystal palaces, pointing to the sky!  Things don’t seem to  improve ( at least on the credibility front)  when we read that the intrepid band of monastic explorers were pelted by a hail of smelly balls of fire, by hostile inhabitants of one island!  Or of furry men and monsters, with cat-like faces and long tusks in their mouths.  It all sounds rather fanciful, like Gulliver’s Travels.

Well, fanciful perhaps, until we give the writing a slightly more imaginative, sympathetic second reading.   Presumably the sea monsters were whales, and the giant crystals icebergs. 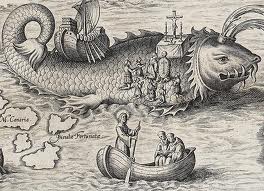 The stinking fireballs must have been lumps of lava, erupting from one of Iceland’s many active volcanoes; complete, one presumes, with the foul-smelling, eggy aroma of sulphur.

Naturally, the monks had never have seen icebergs, fireballs or volcanoes before, so their writings, (later transcribed in the 9th century Latin text) simply attempt a logical explanation.   A monster with fangs and cat-like face can only be a walrus.  Furry men must be the Inuit “Eskimos”  and their coats of hide and fur.

When I read these details – whales; icebergs; and the volcanic lumps of Iceland- I became convinced the Brendan legend is in fact true.  It still doesn’t prove that he landed on the North American mainland itself,  but it seems to me that far from be-bunking the idea of Brendan’s epic journey, such details seem to strengthen his claim.

If indeed it is true, and who knows what archeology or other evidence may yet emerge one day-  then it will be a proud day for Ireland.    The Irish as first Europeans in the Americas?    You’ll never hear the end of it.

Leave a Reply to History of the Ancient World Cancel reply