Part ii- Dublin to Concarneau and Carnac; a sailing voyage on the coasts of Brittany.

We leave mid-morning to catch the train,  first leg Bangor to Birmingham.   Despite the continuing grey weather, the first part of this journey is quite nice,  with the tracks running along the coast of Wales.

The train passes right under the walls of one of the famous Marcher castles,  a series of huge fortresses, built by Edward I and other early Anglo-Norman kings to subdue the Welsh.

I try to take a decent picture of the castle. And fail dismally. 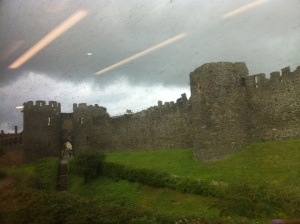 Paradoxically, the railway line we are travelling on is in one sense very like the marcher castles in function.  The line was also one of huge strategic importance to later English regimes.   It allowed them to rush troops to my country, to Ireland, in the event of crisis or rebellion.  The line is in fact just as much a projection of British military and economic power, and a later instrument of colonialism.

Still, although both castles and railway were instruments of domination, today they are beautiful, impressive.

It is hard not to be impressed by the castle especially.  Some builders, those Normans.   With their military engineering it’s easy to see how built an empire from Gascony to Ireland and Scotland, with outposts in Southern Italy, Sicily and even in (during the crusades) the Middle East, which they called the Holy Lands.

They were masters of ecclesiastical architecture too of course.  They were in fact, more or less, the inventors of Romanesque architecture.  I’m looking forward to seeing lots of nice church architecture in NW France, Romanesque and Gothic.   But first we’ve got some railway still to travel, and some sailing to do

Speaking of which, somewhat ominously, our next interesting view from the window of the train, is a shipwreck, stranded on the coast!

Again I try and take a decent picture.  But every time I hit the shutter, some tree or bush leaps into frame.   I play a game of cat and mouse with the shipwreck.  I try to catch it: it hides behind a tree.   I try again: another tree blocks my view. 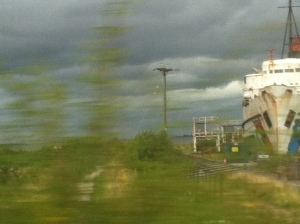 Okay,  deep breath.  Patience.    I wait,  crouched, and indeed cat-like,  for the endless shubbery to clear..   poised and waiting,  like a hawk, cat-type thing,  patient and cunning.   I will capture this picture, I I konw exactly where the ship will be when the view clear,  the precise eye line for the perfect picture of the full ship.    Wait… wait…   Okay:   NOW !!

Oh for the love of God!  Missed it again.    Okay, that’s it,  I give up.     Anyway,  the ship moves behind me now,  I can’t even see it behind my shoulder.   I pass the camera-phone across to Lindsey on the other side, to see if she can do any better.

Rather annoyingly, she takes a perfect picture first time.    Her snap is an exercise in artistic surrealism.  It makes it look as though the ship is sailing, through a field of hay bales.

Later the train crosses the boarder, into the midlands of England.    I peer around, like the curious bean I am.

I feel a bit like Michael Portillo, the former politician who I used to hate,  turned pundit and TV personality (who I quite like) on one of his Round-Britain by-Train programs; noting “sights”  and “points of interest”;  as he quotes from his copy of Baedekers, the famous, highly successful series of 19th century travel guides,   written for the Victorian beginning of mass tourism.

We disembark at Birmingham.   This is the second largest city in the UK, a country I spent 4 years of my life in.  Yet curiously, I’ve never been here before.

I’d like to be Michael Portillo here.   I’d love to explore, to visit the city art museum, (which I believe is very good) and see the wealth of fine 19th century architecture.   But there is no time alas before the next train.  We barely have 40 minutes, not nearly enough to park the massive bags or go anywhere worthwhile.

The small radius immediately around the railway station that I do see is, frankly, hideous.

Unlike Liverpool (shipping) or Manchester (textiles)  Birmingham as always been a city of many businesses,  “the city of a thousand trades”  if I remember right.  That wealth of industry and engineering, means, I think, that it was bombed particularly heavily in the war.

The rebuilding & re-construction of the post-war years was pretty dreadful.   Even in this short time, it’s clear in from this location that nowhere suffered worse than the city centre area around the train station,  from appalling, misguided 1960s ideas of how the future would look,  motorways running right through,  the badly-designed station, shoehorned into inadequate space, it ugly concrete buildings.

In the damp, grey, drizzle it looks bloody awful.     Yet Birmingham is a major, productive, important city, quite a well-off place.   It deserves better than this mess.  They should seriously consider knocking the centre all down and literally starting from scratch,  combining the best of the old, (a more human scale)  with new, modern, cleaner designs and materials.

Anyway,  that is enough of my ill-informed pontificating.  Time to get on Train number ii.

Our final train brings us southwards, down the centre of England, bending west into Dorset and Devon.   At last we are back on the coat again.  I feel glad,  happy to be back looking at the sea again.

We pass a sort of bay, where two towns face each other across an inlet.  Lindsey once worked on the local politics surrounding the proposed installation of barriers and flood defenses.  She fills me in on the history. 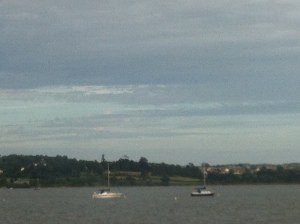 Then, suddenly, after a day & a ½ of ferry and rail,  we arrive.   We’re in Plymouth.  At last !   The train station is (again) pretty grim; yet another argument for retaining the old,  against the arrogance and imbecility of much 20th century architecture & planning.

We drive to the marina.  There we see Mike’s boat in the flesh for the first time.     She’s named White Morning, – an American-built 36 foot “Hunter” sailboat.   “Hunter”  incidentally,  is of course the name of the firm that built her, We are not going out into the north Atlantic to guard convoys from U-boats, she is not a sub-destroyer or anything. 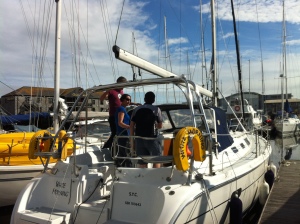 She will be our home for the next 8 days.   Lindsey is in the fore’cabin, under the foredeck; Mike as skipper, in captain’s quarters aft.  Your correspondent is the middle, happily in the lounge/kitchen area, although in the long sail ahead, as we change watches, Lindsey is remarkably kind about letting me sleep in her cabin when she’s in at the helm or on watch.

That night we eat dinner in a Thai restaurant, have a drink on the quays and wander round the quays and the old adjoining streets. 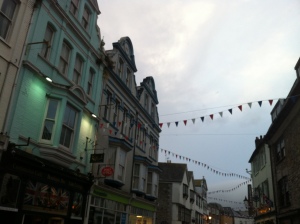 Even in this historic area called the Barbican, that was preserved- there are plaques everywhere, crediting the work of the Barbican Trust, an association of passionate amateurs who campaigned to save the area from planned demolitions in the post-war years,  working to save and preserve it, often in the face of much official indifference, hostility and opposition.   Like our grim experience home in Ireland, it’s yet more proof that you can not leave things to engineers, planners, civil servants or still less, (God help us)  to “market forces”.   Through their great work the Barbican Trust managed to save most of the old town, including old captains and merchant houses dating back to the 17, 16th century and beyond.    Some of these old houses now have lovely Tudor-style gardens re-instated at the rear.

The next morning we explore the town again.  As obvious as it is to state,  it’s notable everywhere, the strong, deep connection between town and the sea.   There are plaques to famous naval commanders,  squat, pretty little captains houses.   There is a plaque to the renowned pilgrims, who set off from Plymouth on the Mayflower, to found the colonies of New England.

On the coasts are sea defenses from the 16th and 17th century; from the long struggle with the Napoleonic France, and from both World Wars.   On the quays, a sinister looking old, unexploded mine acts as a collection “box”, for the lifeboats.  Above all, hundreds, maybe thousands of small boats and yachts bob about, at berth in the many marinas.

Soon we will be off, for France.

6 thoughts on “Part ii- Dublin to Concarneau and Carnac; a sailing voyage on the coasts of Brittany.”