Here is a sight to which Dubliners, or indeed many who’ve visited Dublin, will need no introduction.  (my photo) 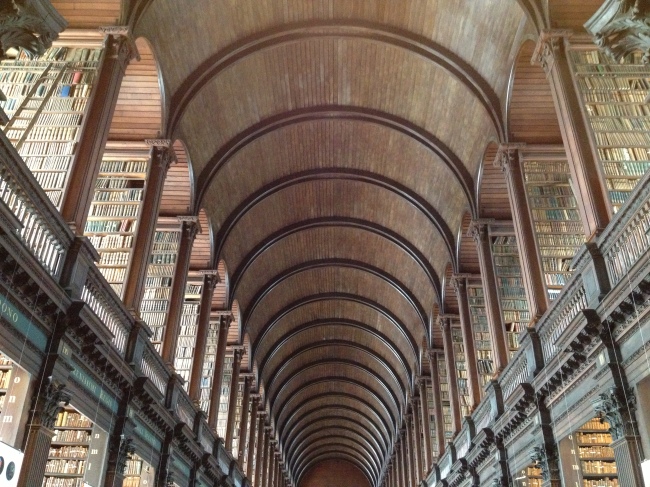 Yes, it’s the famous, justly famous, Long Room of Trinity College.    It sits as the top level,  the top two levels really, of the Old Library,  that handsome old building which divides Library Square from Fellows’ Square in the Trinity Campus.

Trinity of course has several other libraries,  including the Berkley, the Usher, the 1937 Graduate Memorial reading room, and others.  All of these are in greater use as actual libraries than this lovely old place, which is more of a spectacle for visitors these days,  although important research and book conservation does go on here, of the tens of thousands of precious old volumes you see above.

The original building is by Thomas Burgh, (1670- 1730)  the architect responsible for other such well-known Dublin buildings such as Stephen’s Hospital and the Royal Barracks, now called Collins Barracks since Irish Independence  (and more recently, converted to a museum of decorative and applied arts)

Burgh certainly built a fine library for Trinity.     In his original design, the library stood on a series of arcaded arches.  (See painting below)  This design was in the hope that the flow and circulation of air,  and the physical separation of the library floors from the wet ground, would keep the precious books dry, amid Irelands’ notoriously damp and muggy climate.

Presumably the arches also gave professors and undergraduates alike a place to shelter, on rainy days.

So the entire building stood on these lovely arches, as you see above.   You’ll also note that the rest of the building was a rather nice dusty pink, which has, alas,  faded to grey over the intervening centuries.

Burgh however, only gets “joint-billing”,  for the beautiful building we see today.   That’s because his design for the interior, although very fine, looked like this when it was built: (see below) 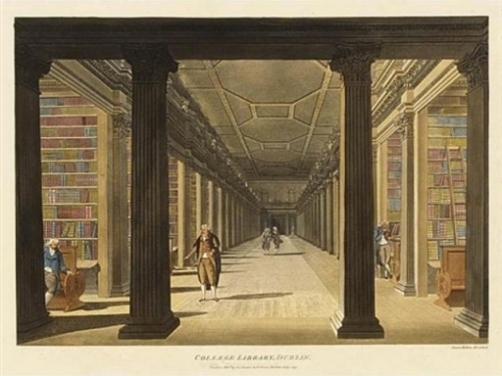 In other words,  as you see above, the two main reading rooms of his original library lay on separate floors.

But then,  in the mid-19th century-  with great imagination, foresight and verve, one has to admit Trinity College-   commissioned the famous firm of Deane and Woodward to repair and remodel the interior of the library.

This they did, radically reconfigured the entire space, knocking the two floors into one.  (If “knocking” can possibly be the right word here?)   and installing the spectacular barrel vaulted ceiling we all know and love today.    In doing so,  they created, many have judged,  a plausible contender for (the title of) the most beautiful room in Europe.

Or-  in the more memorable words of one admiring contemporary,  (and in one of my favorite-ever observations about Dublin): –

–  “What had been merely superb, now became sublime” 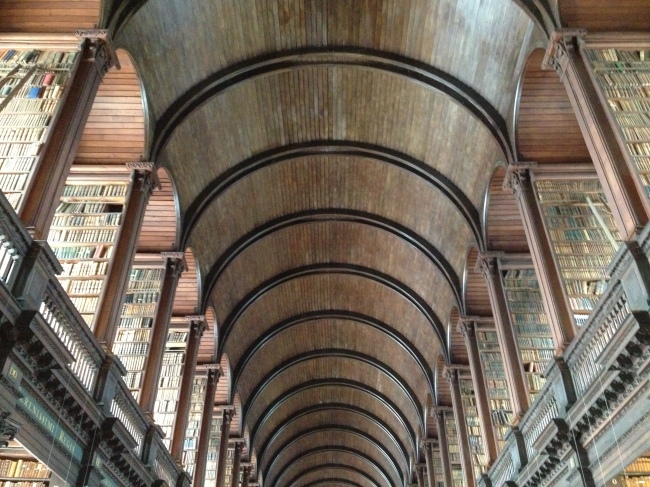 The lower floors of the same building  also contain of course the famous Book of Kells and Book of Durrow, two extraordinary and priceless works of illuminated book art, created by Irish scholar- artist monks during the early  Christian era.

But the Long Room itself also contains some interesting art, the wonderful busts of old writers and philosophers.   These sculptures will be the subject of our next post.

16 thoughts on “The Long Room | From superb to sublime.”