If you are rushing through 14th Street station in New York, or perhaps just distracted by your book, newspaper or cellphone, it’s easy to completely miss these charming little fellows.

Naturally they can’t be a trip or bump-hazard,  so they’re placed out of the way.  That means tucked discreetly out of the natural sight-lines too.  So they  stand instead in the in the frames and shadows of the subway’s  engineering and architecture.   Some in the diagonals between huge steel struts, stairways and escalators.  Others perch atop the subway’s massive steel beams.    Like I say, it’s very easy to pass through the whole station, and just miss them all completely. 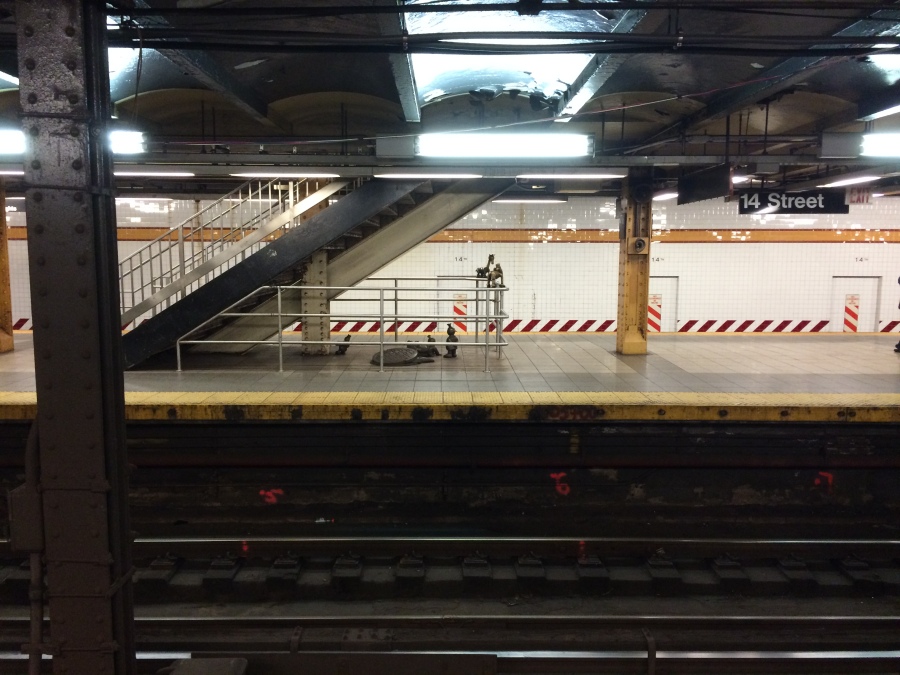 But that would be an awful shame. 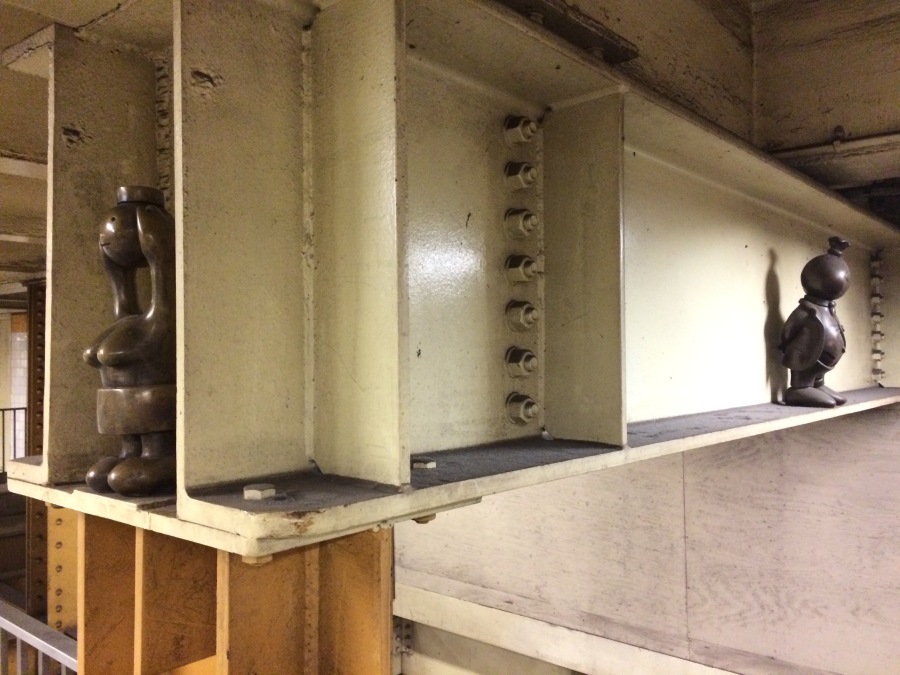 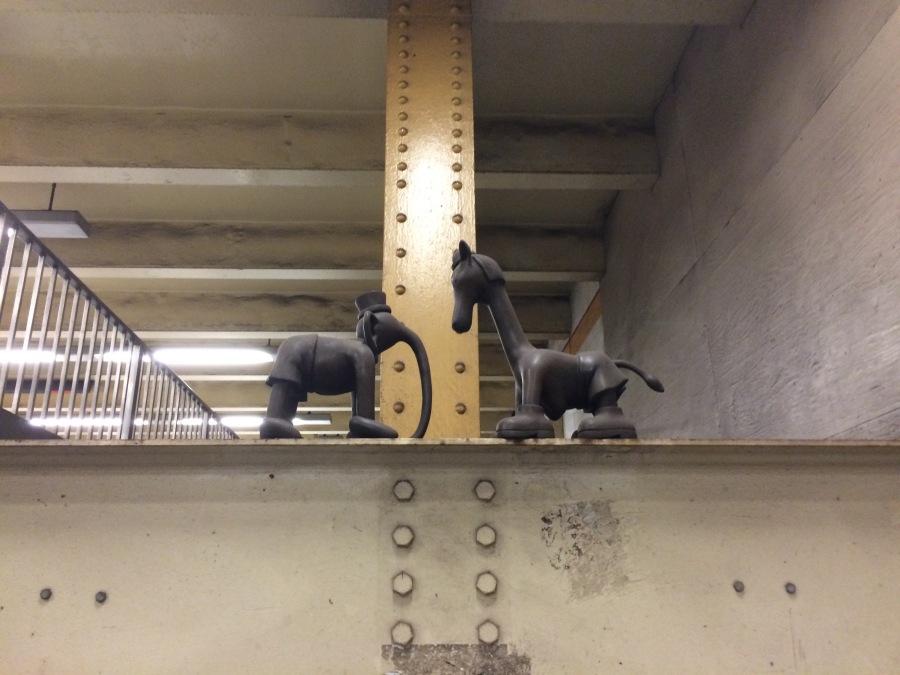 Because really, this is one of the most charming pieces of work I’ve ever encountered.  There is something ineffably sweet about the small people, as they go about their different tasks.   Some are clearly workers, with hardhats and overalls, engaged in honest manual labour.  They fix and build and sweep and make and clean and do.

I spotted one poor unfortunate guy who seemed to be homeless, sleeping rough on the streets.

Yet other figures seem to be more capitalists, with top hats and sleek clothes,  many even hoarding cash, clutching comically cartoon-large coins tightly in their paws.

All this aspect of the work seems to invite political critique.   I’m usually partial to a bit of political critique myself.   From time to time, it’s often what a debate most needs.   But frankly, its difficult to focus, on political critique, or anything else remotely serious, when even the sleek business, rentier class turn out to be these tiny, chubby, little charmers.

It’s a puzzle this dichotomy, this whole tension, between the potential, ermm..  “class-struggle”  aspect of the work, and the contrary fact that that potential is unlikely to be ever realized because frankly,  all the figures, regardless of “income” are all just so damn nice.  You ask yourself, in this highly capitalist city, this capital of global finance, did the artist have to “code” his work, or dress it up in niceness perhaps, to get it past some Art-commissioning body or committee perhaps   (Blinding them all with charm?)   But that doesn’t seem likely dies it?  Because there’s something very genuine and affectionate about this work.   Maybe that’s just the way the artist sees the world, essentially apolitical,  with genuine and equal affection for all types of folk who populate (his representation of) the city.    It’s a puzzler, this whole question.  But it somehow never detract from the central fact of the whole work, which is the fun, the sheer pleasure,  of finding these little guys, then being charmed, amused and intrigued by them.

Some of you might have read one of my posts on other New York Public sculptures, either the fantastic Lego-building  “Collectivity”  project of Olafur Eliason, or the superb standing circle of mirrors, on the Brooklyn riverfront Promenade.  Both of those I think, are really wonderful, clever, generous and thought-provoking works of art.    And this work is just as good.    As figurative work, featuring its cute miniature people, cartoonish even it might be easier to initially engage with, I don’t know.   Maybe it even provides even more pleasure for some people than those other works.   Which, after that Lego piece, would really be saying something.

Either way, I loved it.

After i encountered this project, I went online to research and try find out a little more about it.   The project is called Life Underground, and the artist-sculptor is Tom Otterness.    It was mostly installed in 2001.  (one has to imagine before September of that year)  One piece I found was an interview with the artist.   One thing he said  struck me as particularly resonant.   He still lives in New York city.  And he said that if ever he feels depressed or sad, even to this day, he just makes his way down to this subway station under 14th street.

There he hangs about,  in the general area of his work, waiting.     He rarely has to wait long.   Some couple or person, or family will find the work.   The reaction is nearly always the same.  It just makes people happy.   The artist never announces or introduces himself.  He just remains at a discreet distance.  he walks home again straight after.  But just seeing how happy his little sculptures make other people, has the same effect on him, (as you’d expect).  It always cheers him up.   🙂

And it’s hard to disagree with that. 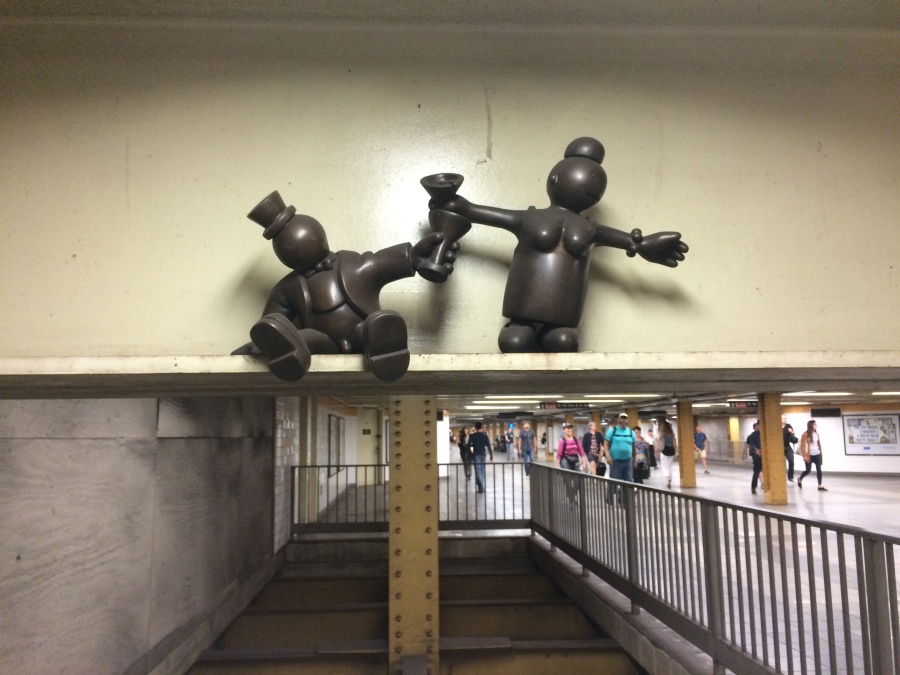 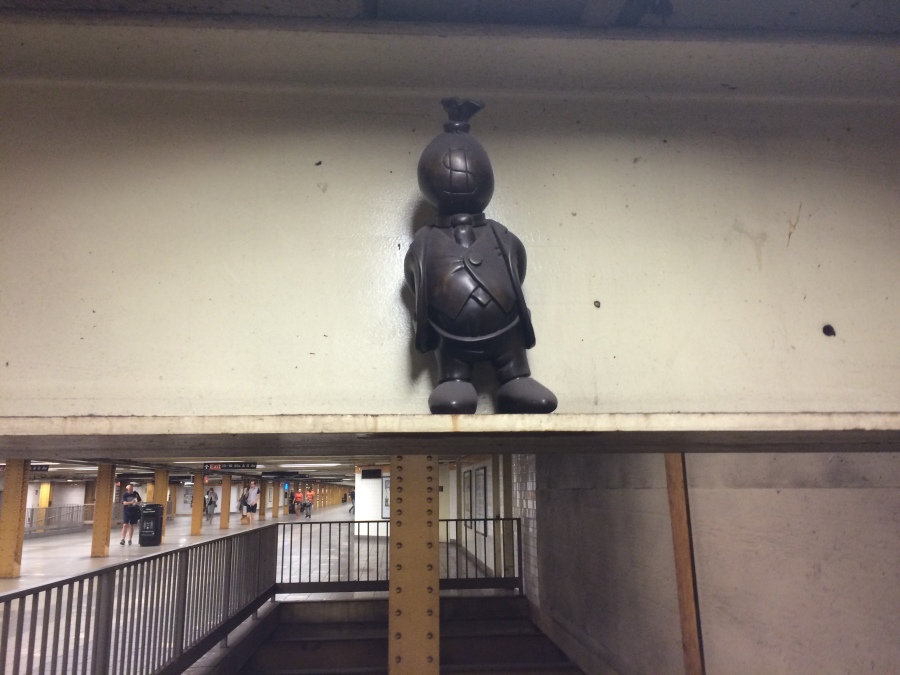