The National Museum of Ireland (NMI) possesses the largest and best collection of material related to the Easter 1916 Rising, (as it does with many other events and periods in our history) With their resources and the expertise, both internal and external they can draw on,  nobody realistically is better qualified or equipped to interpret that material. No surprise then that although there other first class exhibitions around Dublin, this is single most important one in the country. For overseas visitors to Dublin on a short trip, this is the “must-see” 1916 show, at least as far as exhibitions go. Visits to historic sites are a different matter, see footnote end of page. This is a brilliant exhibition.

It was crowded the day we visited. But admittedly that was Saturday Easter weekend, immediately before the huge Dublin centenary parade the following day. It won’t always be so packed. The space used (the old Riding School) is not particularly large for such a key exhibition either. Exhibits therefore are close so there are inevitably, a series of pinch points. The NMI at Collins Barracks is always constrained by the nature of their buildings, which were of course never designed to be a museum. I don’t know if they considered holding the show in an alternative location. But I’m glad they don’t. Whatever the shortcomings of the space, this is the right venue. It’s a short hop up to Arbour Hill, where the executed leaders were buried.  It’s within walking distance to GPO (and/or for fit people to Kilmanham also)  Even more important perhaps, the sheer, massive size of the old British “Royal Barracks” (as it was then) – the largest purpose built military installation in the world that point if memory serves- gives some idea of what the rebels were up against.

As for the crush, people when I visited were all so engaged, so curious and kind, that even in the crowds (or perhaps especially in the crowds) it was a privilege to be there. The Rising is a very real and personal, almost immediate thing for many Irish people. This may the last generation tis is so.  There is still a tangible sense of connection. That sense of curiosity and connection was palpable in the air.

What of the exhibition itself?   Well, top marks. The curating is first-class as you’d expect. The exhibition starts with the iconic Proclamation, including the story of how it was actually printed, no easy task for the 3 men involved (below) 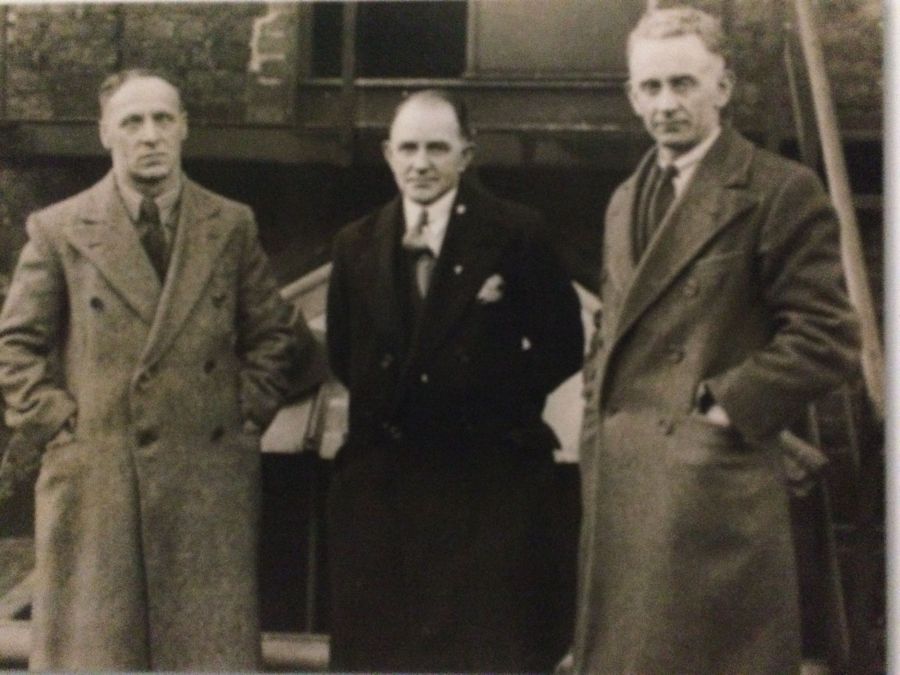 The main body of the exhibition finishes with the executions.   Although there are some other interactive and search based resources at the tail end too.   In between, the main body of the show is arranged by the different battalions of the Rebels during Easter week 1916, and therefore into the different locations they held during the week; the GPO; Jacob’s factory, Stephens Green/College of Surgeons; Boland’s Mill, Four Courts; South Dublin Union and so on. 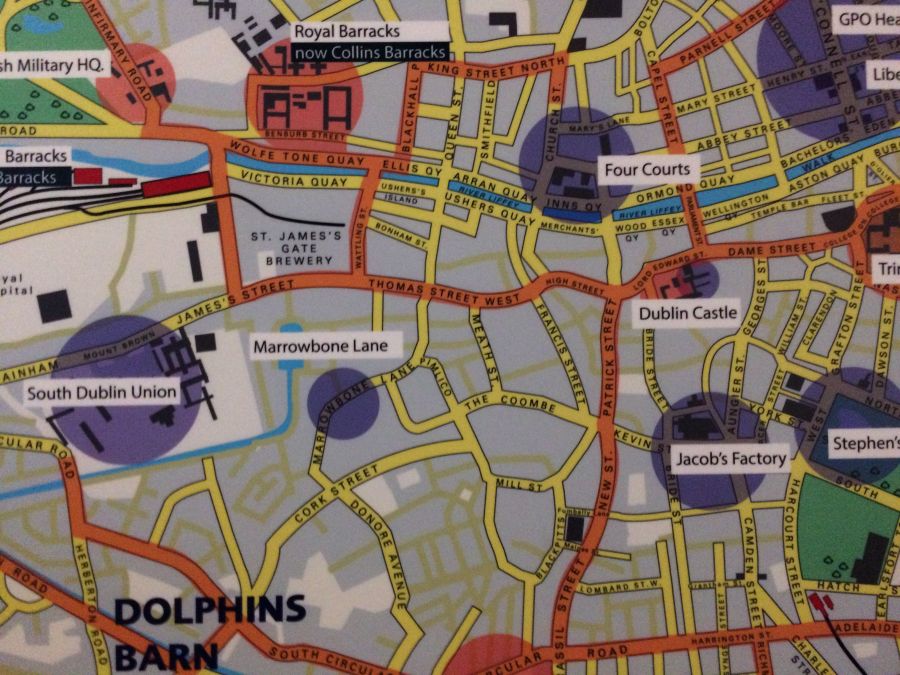 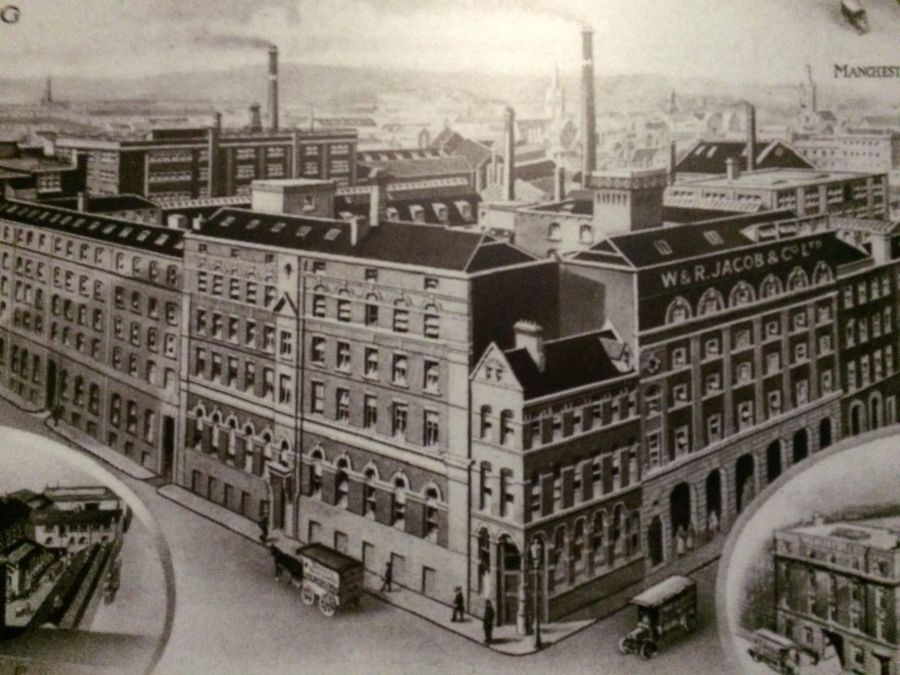 Within each of these exhibition stages you’ll find clear maps showing the position, picture and sometimes diagrams of the buildings occupied; an outline of the event and actions of each garrison and artifacts including letters, documents, weapons, flags, diaries, personal effects and so on.

Objects range from bicycles to revolvers. Eamonn Ceannt’s slippers and battered leather bag , which he used to carry ammunition but which also still parts from his Uilleann Pipes, is unsettling, poignant and personal. But then, so is almost everything here. The rare Protestant volunteer, who converted to Catholicism before the surrender, and who then suffered so much from cold, damp and malnutrition during his interment at Frongoch prison camp he died soon after release. Or the two Nealon brothers, who fought during Easter week on opposing sides, and who might so easily have killed each other.  They did not, thank God, but the Irish brother serving in the British army was killed in the fighting (as many Irish, both police and soldiers were). Or the massacres carried out on North Kings Street, when members of the Staffordshire regiment, following appallingly bad and unclear orders that could well have been designed to provoke an atrocity, and duly murdered 15 civilians in their homes.

As alluded to above, the curating involved in mounted this exhibition took many years of diligent work and research. The quantity and quality of artifacts is second to none. This being the National Museum, there are many original documents available nowhere else, from mobilization orders to Volunteer units to truly unique documents (Tom Clarke’s death certificate for example). Some documents are just outright iconic, notably the typed order to surrender “lay down arms” written by Patrick Pearse then sighed by him and, in a hand written addition, by James Connolly (as Commandant in Chief of the Irish Citizens Army).

As motioned, the main body exhibition finishes with the executions. It is quite extraordinary to see Tom Clarke’s death certificate. This superb painting (below), by Sean Keating, of Ned Daly, just prior to his execution, I had not seen before.

There are many 1916 exhibitions especially in Dublin and also countrywide. Many of them, such as the one at College of Surgeons, or the one at Dublin City Library and Archive, are excellent. But as they say, if you only see one 1916 show in 2016: make it this one.

The exhibition runs until near the end of 2016. Opening Times: Tuesday to Saturday 10am-5pm, Sunday 2pm- 5pm.   Closed Christmas Day, Good Friday and Mondays  Free Admission:   Admission to the National Museum of Ireland is free.   Group Visits: Guided and self-guided group visits to the new exhibition Proclaiming a Republic: The 1916 Rising are now booked up to June 2016. To make a group booking contact their Bookings Office.  Even for individuals it is worth visiting the ‘Tips for Visiting” page of the NMI website prior to any visit.

Coming soon, reviews of 1916 exhibitions connected with the Rising in Rathmines Library; the James Stephens in 1916 exhibition at the National Gallery of Ireland, and other 1916 related exhibitions elsewhere all around Dublin.

To see a book detailing many of the artifacts connected with the Rising, including many in the NMI exhibition, see here

Visit Ireland in 2016 if you can.  The place is alive with history.

Above: the Plough and the Stars, the iconic flag of the Irish Citizens Army. It flew over the Imperial Hotel during Easter week 1916.  The hotel was owned by millionaire Dublin businessman William Martin Murphy,  a hate figure for workers, as he took the lead in breaking the strike in the Great Dublin Lockout of 1913 which led to near starvation for many workers and their families, as well as violence from the police.