Here’s a little walking tour I did in my second week,  less the directions I am afraid,  (I was too busy taking pictures, avoiding traffic and gawping at buildings to jot down the street names)  But I think you’ll be able to follow a similar route.  I started in my own area of San Telmo,  and continued for two or three hours, stopping to look at interesting buildings, and more or less winding through San Telmo and gradually into the large central district of Micro-Centre.   Along the way are some lovely buildings, spanning every period from the 17th to the 21st century.

The 19th to early 20th century ones are of course often decorated with every type and style of decorative detail, ranging from the sublime to the bizarre.   Here are a few for you to enjoy. 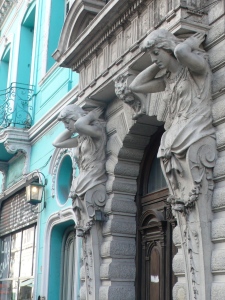 Starting in San Telmo…  As  one of the earliest areas of Buenos Aires, it has buildings that go all the way back to the original settlement the 1600s.

Here is a fine 19th Century door and archway,  with the frame above supported by these two lovely caryatids.

One of my favourite buildings in San Telmo,  this retro-deco classic on calle Defensa.

Another lady being supportive,  this time with her head only.  A corbel from the late 19th or early 20th century.  San Telmo. 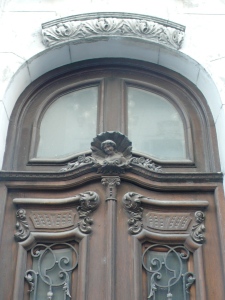 Detail,  close-up,  from the top of same wooden door.

Man, in iron,  hammering something on top of an old building

I don’t know what building alas,  an old factory or workshop?,  a government ministry? 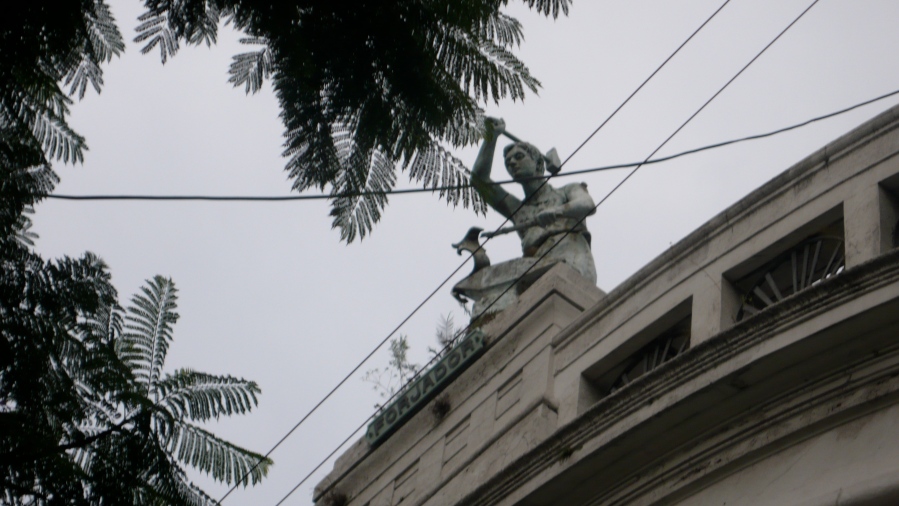 A few minutes later, I was deeper into Microcentre,  with it’s much larger, imposing buildings.  These generally date from later,  mostly from the late-19th and early 20th century

Then these extraordinary slave statues, pictured below, appeared…

They put you in mind of Hebrew slaves from Aida or the Old Testament, obviously.

I love this type of stuff, and as we have so little in Dublin,  I got quite excited.    There is certainly some excellent Egyptian-Neo Classical in Dublin, notably the brilliant BroadStone Station and the National Concert Hall/old UCD,    but I think I am right in saying,  perhaps the only place you’d see this hard-core Gotham stuff of this massive weight (& quality)  is a few huge “jelly-mould” buttresses in the Guinness storehouse area of James’ Gate.

There were four  Hebrew/Egyptian slaves,  each different.

Then, as if the huge carved slaves were not extravagant,  mad, or “Gotham” enough,  I looked up and saw a 6/7-foot eagle carved in stone,  perched higher up on the building.

I don’t know who designed, commissioned or paid for this building,  but they are my new hero.

As soon as I finish my Hidden Dublin book I am going to hot-foot it back to Buenos Airees and do the Hidden Buenos Aires version.

This is an extreme example,  but this type and quality of stuff is everywhere.    Call me an anorak,  but Very exciting stuff for your corespondent.

For example I found this classic old turn of the century shopping arcade,  with this wonderful dome.

and in the same place,  look at the detailing on the old stairwell and around the elevator shaft …

That’s about it for now.    For those new to this blog,  if you enjoyed this post above,  you might also enjoy 2 other “picture-essays” posts from Buenos Aires,  “Graffiti” or “Cemetery in Recoletta”.

Don’t forget,   you can also easily get notice of future posts simply by pressing the tiny “Follow”  button,    located top-left of the blog-page,

Future posts will be about Dublin, its History, buildings and social life, among other observations.

Of course it is equally easy to unsubscribe the same way, or via any future post you may receive. 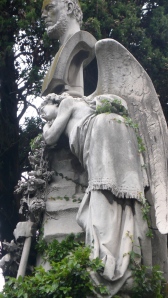