Here,  slightly later than advertised,  are the answers to the great Dublin street scape quiz,  along with a few choice pieces of information on some of our featured Dublin buildings…   The prize for this quiz was a pair or family ticket to any Dublin Decoded walking tour.

Just one quick word of warning,  obviously,  if you have not done the quiz yet,  or at least tried the quiz yet…  then you are currently on the wrong page !    These are just the answers, not the questions.

Please find The Dublin Street Picture Quiz, either in the sidebar “Recent Posts”  to the right of this window.

Or, if you can’t see it in the recent posts sidebar, please look for “older posts”  (the little grey box, at the foot of the page).   Failing that you can always look in “Archives”,   you will find it there.

Be warned, even on the question page,    people have submitted answers via the comments bar,  so look and guess your answers before you scroll down to the end.   Otherwise,  where’s the fun,  eh?

For those who have already tried the quiz and want to check your answers now,  read on… 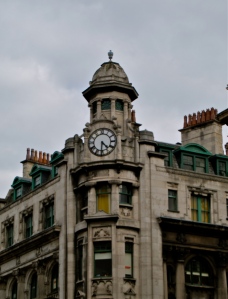 A lot of people were convinced this lovely old turret was on O’Connell Street, and indeed there is a somewhat similar building there.  But this particular tower or turret belongs on College Green, specifically the corner of College Green and Trinity Street.  This is the building which hosts the famous old Pen Corner shop which all Dubliners know,  (and for which reason I cunningly let out of frame when I formatted the picture, as the shop would have been too much of a give-away.  Well done to Phillip Tottenham and Lisa Godson for getting this one right.

The building as  a whole  (street number 12-14) is described by one of the greatest authority on Dublin’s architecture, Professor Christine Casey,  as “a bizare and much maligned design by A Bloomfield Jackson, begun 1899”  Prof Casey goes on to describe it as “Six stories with a tower-like corner crowned with a cupola of Solomonic columns”     A cupola is of course a miniature dome atop a tower or turret.     My understanding of a Solomonic column is one shaped like a twisted barley-stick, a sort of spiral, so I have to confess I don’t read these as Solomonic columns,  but as I say Profesor Casey is perhaps the most important authority on Dublin’s architecture active today, so I only make this slight quibble with great trepidation.    Either way, I hope you’ll all agree it is a lovely building.   Let us malign it no more.    The clock incidentally on the facade is almost always wrong  (saving twice a day of course)    By the way, remind me to give you all the great “Stopped Clocks”   parody piece one day..   I think you might enjoy it. 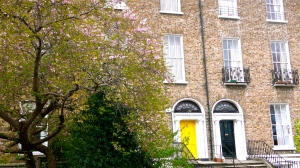 This was the one that threw nearly everyone, it was very difficult,  as there are hundreds of terraces around Dublin that look very like this,  although oddly a lot of you were just a couple of streets away.  Mr A O’Keefe for example guessed Wllton Terrace, which is only slightly further west along the same canal.  But this is Herbert Place.   The sole 100% correct answers came from Lisa Godson and Emmeline Henderson. 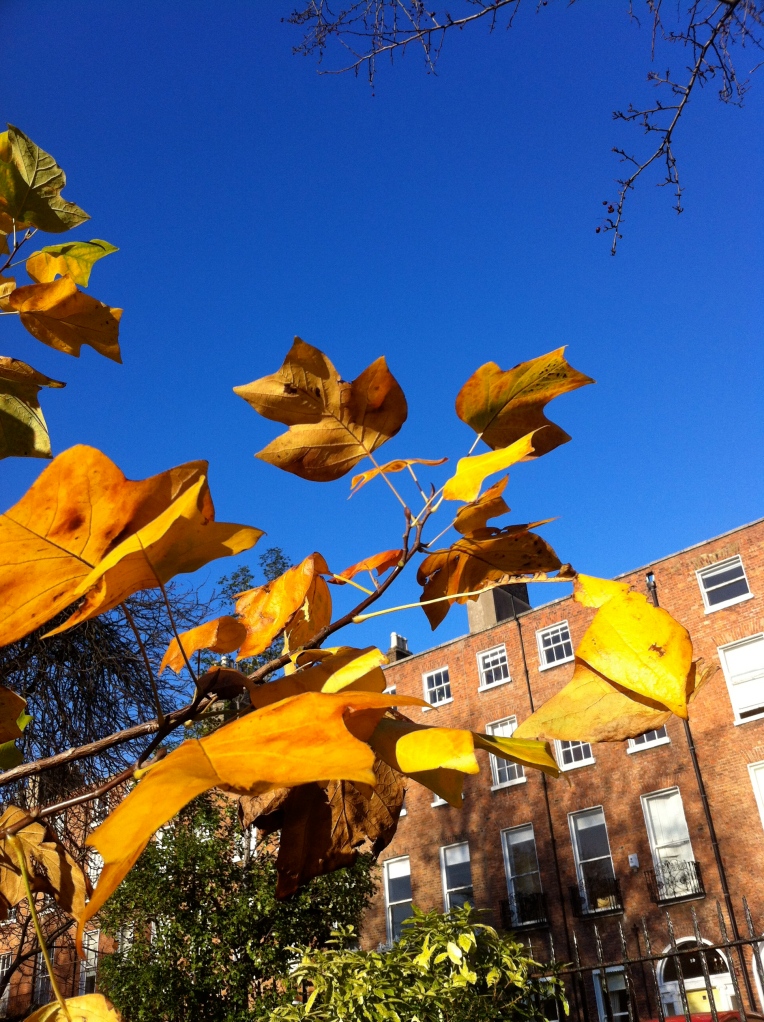 Taken on my i-Phone some astonishing winter afternoon six months ago.   The iron railings should have screamed park.   but which park?   Merrion Square was a popular guess,    But among a couple of others, Tig Mays nailed this one.   He recognized the tree, because as he pointed out, he had planted it there himself.      This is Tig’s great canvas,  Fitzwilliam Square. (looking North) 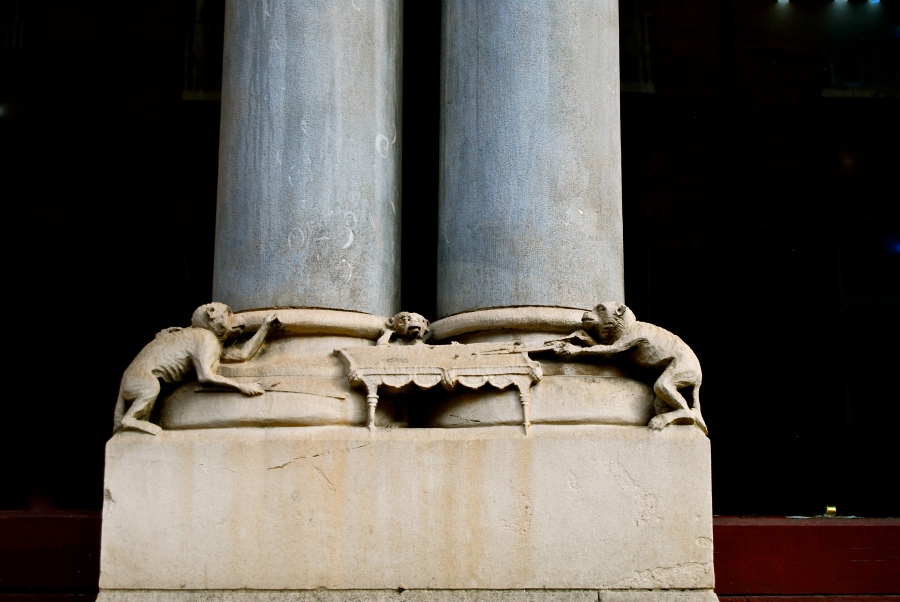 A lot of you clearly recognized the architects  (Deane & Woodward)   and the sculptors (John & James O’Shea)  even if you didn’t explicitly  name them,  because a lot of you guessed the lovely Museum Building in Trinity College.  In fact this is another wonderful building by the same (brilliant) team, The old KIldare Street Club-house, at the corner of  KIldare Street & Nassau Street.    None of the many birds, plants or animals on the Museum Building are playing billiards,  whereas these ones –  in mocking parody of the well-heeled KIldare Street club members-  are.    Amazing that the irreverent O’Sheas got away with it really, no?

By the way, later the two gifted Cork brothers accompanied Deane and Woodward to England,  to execute the sculpted stone decoration on their prestigious new commission, the  Oxford University Museum Building. This time the O’Sheas went completely overboard.    Their timing was either deeply unfortunate or epically mischievous.    Charles Darwin had recently published his On the Origin of Species”   and was locked in heated debate with Bishop Wilberforce, head of the  Christian conservatives, arguing furiously with the Scientific Progressives,  about the origins of man.    While this was going on,  the O’Sheas rocked into town and proceeded to  festoon the entire Museum building with monkeys.    Many were outraged, and the work was considered a mite… insensitive.    But many of the monkey sculptures were already in place and, quite literally, set in stone.   Ultimately the O’Sheas were forced to convert several into cats.   If you are ever in Oxford and have the chance to visit the Museum building,  home to both the University’s collection and the remarkable Pitt-Rivers museum, have a look at these “cats”.     You will observe they have an oddly simian appearance.

as for correct answers?   Lisa and Phillip got this one correct. 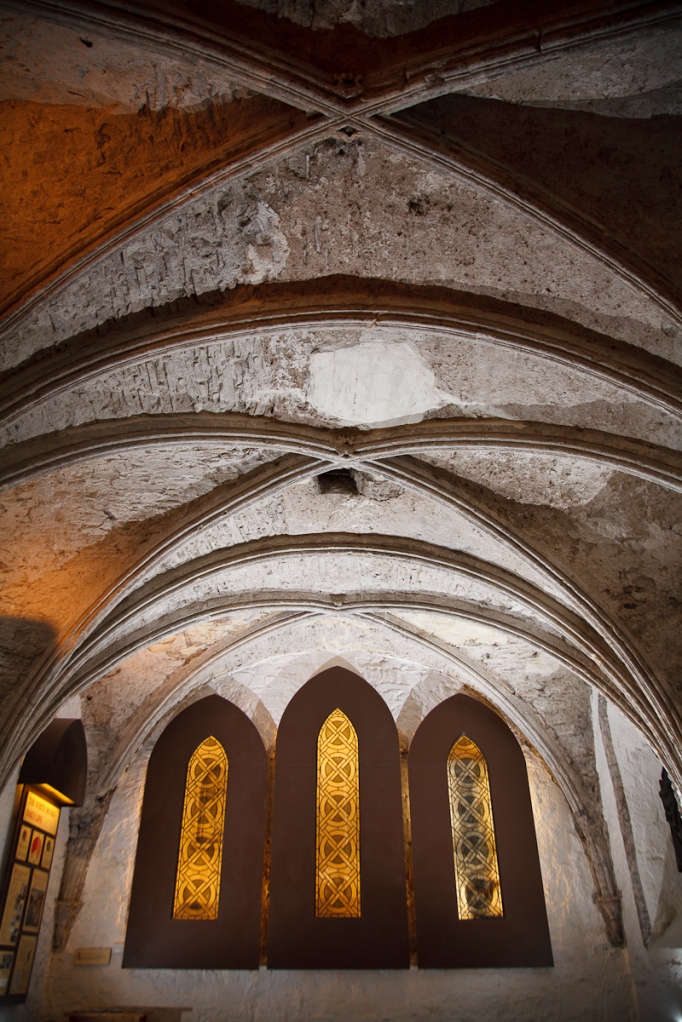 For some daft reason I was convinced very few people knew about this building,  so I attempted to insert a cack-handed clue into the question, asking “where in the earth is this?”    (Saint Mary’s Abbey is of course today buried underground)      Nobody even seemed to notice my awful pun/clue,  except perhaps Phillip T,  (who kindly said it was “cryptic” )    But it didn’t matter, because everyone knew the wonderful old Chapter House anyway.  A miraculous survival story, of part of the wealthiest and most powerful religious house in medieval Ireland, lost and nearly forgotten,  for centuries.

I’m delighted to announce the winner is Dr Lisa Godson,  who is far more of an expert than this writer, and scored a remarkable 5 out of 5.   Well done Lisa,

Your prize is a pair of tickets, or indeed a family ticket should you want it, to any of the new Dublin Decoded Walking tours .

For anyone interested, the 3 tours each cover a different aspect of Dublin, from Viking and Anglo-Norman medieval to 17th & 18th century and finally from the 1820s to the present day.   In fact, I hope you’ll all try and make it to at least one of the tours this early summer.  I am very grateful to anyone who took the time to try out the little picture quiz,  so if you mention your participation in it,  we’ll certainly give you all a hefty discount.

I hope to do a new Dublin picture quiz in the next week or so.   If you want to know about it while there’s still time to answer, please press “Follow” on any of the blog pages and that way, you’ll receive almost instant notice.

Until then, enjoy Dublin,  and thank you for reading.

One thought on “Answers to the Dublin street-scape Quiz (could you name 5 from 5?)”