Just back from a 9-10 day break, mostly spent in extraordinary, dazzling, dramatic Languedoc.

Languedoc, means (Land of) the tongue or Language of Oc -Occitan being the ancient language of the area.   It is a region that has long exercised the medieval-obsessive imagination of your correspondent, your writer-blogger-chappie. 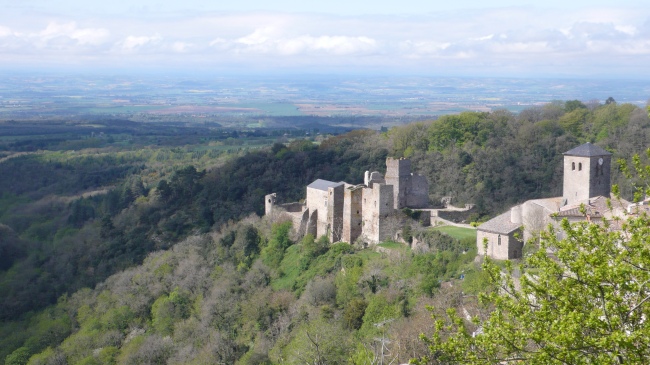 As a land of huge Cathar castles, at places like Montsegur; Lastours and Saissac, (pictures above)  all perched on their craggy, towering cliff top peaks; of mighty monasteries and cathedrals; of battles and crusades, of Eleanor of Aquitaine and her troubadour poets, singing of knights and of courtly love; of stunning tapestries and religious sculptures.

Indeed as a crucible for almost everything that fires the mind about our sometimes cruel, yet often vivid and glorious medieval past.  Because most of our images and ideas of that time either originate from, or found their highest expression in this region.  And it still shows today.

Take, for example, the lovely town of Albi. (Pictured above)  Albi was not especially prominent at the Roman Conquest, nor even built up by them in the Pax Romana following the Bello Gallico of Julius Caesar.  Yet by the 9th century of the first Christian millennium it was growing rapidly.  By 1040 the town was clearly highly prosperous, building new walls to contain and defend its expansion, as well as somehow building the dramatic Pont Vieux (the Old Bridge) miraculously spanning the deep plunging ravine of the River Tarn far below.

The prosperity that allowed Albi all this was based on the woad trade, woad (Isitis Tinctoria) of course being both the plant of that name and the fabulous blue dye extracted from it.

For centuries this precious substance was one of the 3 staples of the dyers trade, prized for textiles and tapestries; the others being weld (green) and madder (red).

Today the deep rich blues from woad have lasted better than the others, as you’ll see, the next time you gaze in stupefied awe at some medieval tapestry in Windsor or the Musée de Cluny or where-have you.   There were other centres for Woad across Europe, but the Languedoc triangle, in between the cities of Toulouse, Carcassonne and Albi, was the best, richest and most productive of all.

Of course tolls extracted from medieval travellers using the Pont Vieux just made Albi even wealthier.  Soon it was the home of a cathedral and the seat of absurdly rich and powerful bishopric.

The Albigensian crusade against the Cathars, launched first by the Pope from 1208, and later by the King of France, the battles and sieges that ensued and the brutal Inquisition that followed, when thousands were tortured and hundreds burnt at the stake for their Cathar “heresy” set the whole region badly back.

Yet Languedoc was far too rich a region to decline for long and a triumphant and resurgent Catholicism proved determined to make Albi a glorious hub of fabulous riches in architecture and extraordinary religious art, as evidenced by the city’s new cathedral, St Cecilia, rebuilt from 1287 by its new Bishop , the evil Bernard de Castanet.

above: Exterior: Western end of Cathedral of Albi

Castanet, as far as I can gather, was an utter tyrant and unmitigated bastard, who used arbitrary arrest to imprison and torture, and abused the Inquisition and the already dodgy and suspect notion of heresy to destroy his enemies and anyone else who tried to stand up to him.  A quick glance at Wikipedia tells us he was accused of murder, pastoral neglect, simony (the selling off of church favours and lucrative positions) and various other dastardly crimes.  His punishment?  He was made a cardinal, by his old friend, the Pope!   (Plus ca change… and all that.)

But he did clearly know a thing or two about where evil Bond-like villains and murderous medieval Bishops should live, especially if they already lived perched on towering cliff top redoubts.  We must give him that.  Just look at the Cathedral he built, for heaven sake.

above: Exterior: Eastern end of Cathedral of Albi

So, aptly enough given the bitter epic war experienced by the region during the Albigensian crusade, his Cathedral looks like some vast towering military castle.  Like some vast fortress tower-thing, inhabited by an evil wizard, like something from Lord of the Rings, you might almost think.

Well, you might think that initially, before nodding sagely to yourself and noting that well, on reflection, it would be more accurate to say from Tolkien to Mervyn Peake of Gormenghast to the makers of Game of Thrones: every author, filmmaker and video game designer fired by medieval grandeur has been inspired directly or indirectly; by Albi and by the Cathar castles of Languedoc, knowingly or otherwise.

And the cathedral really is vast, vying with London’s Battersea power station (built only in the 1930s) for the accolade of largest brick building in Europe.  But since Albi’s candidate is a cathedral, stuffed full of artistic brilliance, built 700 years earlier, with none of the same industrial-era lifting and construction technology that Battersea’s builders had, it easily gets my vote.  (So there Battersea, go get yourself an altar)

Another, later Bishop and indeed another megalomaniac, Antoine Duprat, reconfigured the complex of buildings around the cathedrals and build himself, in matching red brick, another gargantuan edifice, namely this humongous palace.  (seen in the same picture here below)

Below, a detail of the arms of  Antoine Duprat, from inside the museum, in the background is the looming bulk of just one part of his unfeasibly large palace.

Naturally, on the far, river side of this blockbuster fortress-palace thing, it all comes complete with formal gardens on the far terrace, overlooking the high cliffs that plunge down to the River Tarn.

Today his colossal palace is home to a museum and art museum, much of that given over to Albi’s most famous son, Henri de Toulouse-Lautrec.  This wonderful artist was vertically challenged, (due to both a congenital condition and to horse accidents) yet intriguingly also the man known to the prostitutes of fin du siècle Paris as “the teapot” –  for reasons I shall not dwell on here.

But back to the cathedral which is not only very jolly big but also inside, very lovely inside.  But it is extraordinary in another sense too.

In much the same way as the earlier Cathar threat, the later Reformation challenge of Luther, Calvin et at first produced from the Catholic Church another, gigantic, hissy fit, another rash of of burnings, torture, Inquisitions, excommunications and so on.  But (unlike the Cathar threat)  it also forced the Church to take a look at itself.  And this, specifically following the Council of Trent,  produced a level of church reform over time.

For centuries the earlier medieval cathedrals had a sort of inner-sanctum area, where the sacraments were performed and the choir sang, all hidden away from the ordinary faithful outside.    The Eastern and Greek Orthodox churches still do much the same today,  via a screen usually studded with icons and called an “iconostatis”     Anyway,  this area is/was protected and hidden by a Rood Screen, forming the inner area.

You see one small detail of the “outside” Albi’s Rood here below, just ne detail of millions.  Have a look at and around the corners of this picture,  and try to visualise how it fits into the larger cathedral.   Inside the Screened area, is almost more ornate and splendid, if you can imagine that….

During the Counter Reformation, this sort of “screen”  (almost more like a building within a building in fact) was seen as contrary to the edicts of the Council of Trent and so (in the still-Catholic countries) most were removed.  Albi is the only Cathedral in France that still has its Rood Screen, although that term hardly does justice to the architectural & sculptural masterpiece you see here, which, apart from being studded with various saints and prophets, is actually bigger than some churches.

Inside the cathedral, but outside the screen, it is not physically possible to get far enough away from the screen to capture the overall size and shape.   The two pictures below, from inside the screen might give some idea, although it entirely misses the lavish & stunning decoration. 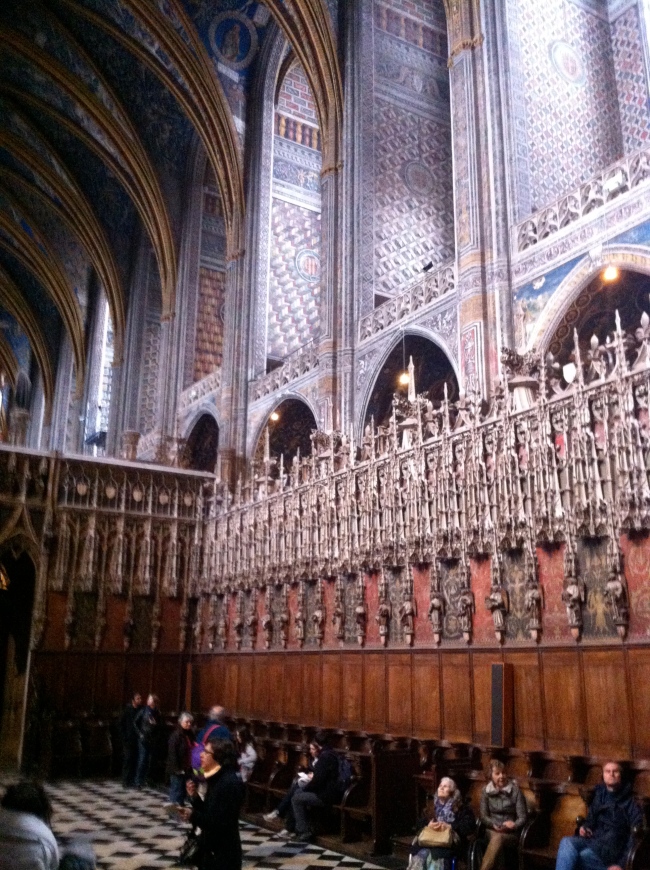 In general though, all one can convey is the amazing level of detail and artistic brilliance.  Here are some more details.  I hope you enjoy…

I was absolutely fascinated by these angels, above.  Now of course angles tend to be pretty sweet as a rule.  But these ones seemed especially cute.  Besides that, then look up, above the angels, and look, just look, at the extraordinary, almost impossible  quality of the carving.     The whole world of descriptive writing on gothic & early renaissance art is often festooned with superlatives, especially about the stone carving of that time,  “like stone transformed, into something like Lace”  or “like Icing Sugar” and so on,  (often justified in fairness)     I’ve seen my fair share of this type of work,  but I’m really, honestly not sure I’ve seen anything exactly quite like this before, in terms of absolute sheer quality.  (there is another detail below,  2 pictures below)

After gawping at it for about 10 minutes, I actually broke my cardinal rule.  I usually subscribe and advocate, a policy of pure looking, and thinking)   But on this afternoon, I went off and got myself, shudder –  an audio guide, just to see if I could find out more about it all.

It transpires that the local rock is some type of oolithic limestone.  I learnt that is somehow, miraculously, – reasonably soft, pliable and – very important- not brittle when first quarried.   So, it can take a lot of close work and stand up to incredible, tiny detail without cracking, shattering or fragmenting.    Then, it hardens over time, (which I suspect gives the edges a harder, shaper, cleaner line).    A perfect stone really.

Of course none of this is of the slightest use or significance without the dazzling, almost surreal skills of experienced, virtuoso master artisans & craftsmen.    I mean you could hand me a Stradivarius and ask me to play you a tune.   but I don’t think the equipment or raw materials would make a bit of difference.   I am in awe of these people, basically. 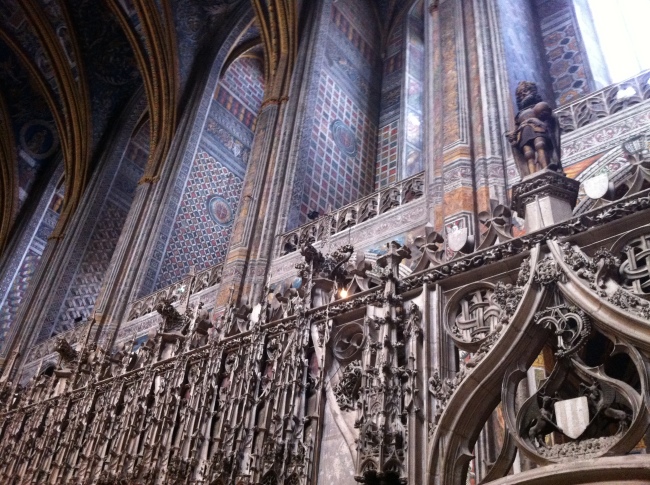 The Albigensians, by the way, preserved their super-duper Rood Screen by the simple and sensible expedient of just leaving it where it was, at the east end of the Cathedral, while moving the altar, choir and sacraments down to the west end of the Cathedral.  Quite right too.  It’s a shame that more didn’t do the same.  If this masterpiece is anything to go by then you have to shudder when you think what other treasures have been lost.  One wonders why other centres did not do the same. I’ll venture with some trepidation it had something to do with leaving the altar at the end of the church/cathedral pointing toward Christ’s birth and crucifixion, in Bethlehem/Jerusalem, but as I have mentioned, I am no expert on theology, nor liturgical architecture.

I hope to post soon about the amazing Cathar castles and fortresses of Languedoc, at Montsegur; Lastours and Saissac.   Then later, if you’re interested, maybe I’ll even tell you about the last leg of my holiday, a long sundrenched weekend, spent at a stately pile in rural Norfolk in England.

But those are other stories, for another day.  Farewell for now.

16 thoughts on “Languedoc & Albi, a hilltop treasure & a mighty Cathedral, all built on woad.”