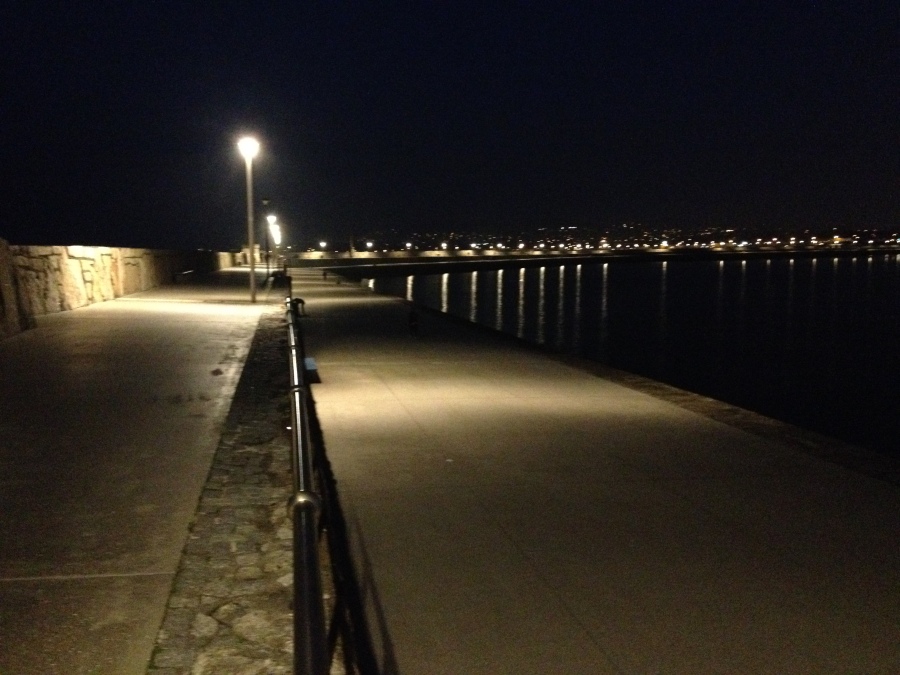 One of those magic evenings. after a warm sunny day, where even after dark, the heat from the vanished sunstill radiates out of the granite blocks of Dun Laoghaire’s East pier.  In fact ‘feeling so light-headed, that in an all time first for this blog, I’ve inserted some music. Ralph Vaughan Williams, beautiful music but possibly not a good choice, a little melancholy.  Playing of is of course, deeply optional.

I’ve been walking down Dun Laoghaire pier all my life, (grew up in the town) Yet it always changes. Or rather it embodies a paradox, on one hand of solid reassuring permanence and mass, huge engineering, deeply impressive, unchanging, those massive,  granite blocks, And on the other, its all framed beside the endless changes and cycles of the sea and beneath the restless scuddering sky. No scuddering tonight.  Is that even a word?  My spell-check is in full revolt.

To hell with the spell check.  No scuddering tonight, all was calm.   Inky, deep blue sky, an infinite sort of colour, saturated in a way no painter will ever manage.  Sometimes like a scene from a movie, or from one of those enigmatic Edward Hopper painting.  Either way, definitely a time to savour, to revel in details. 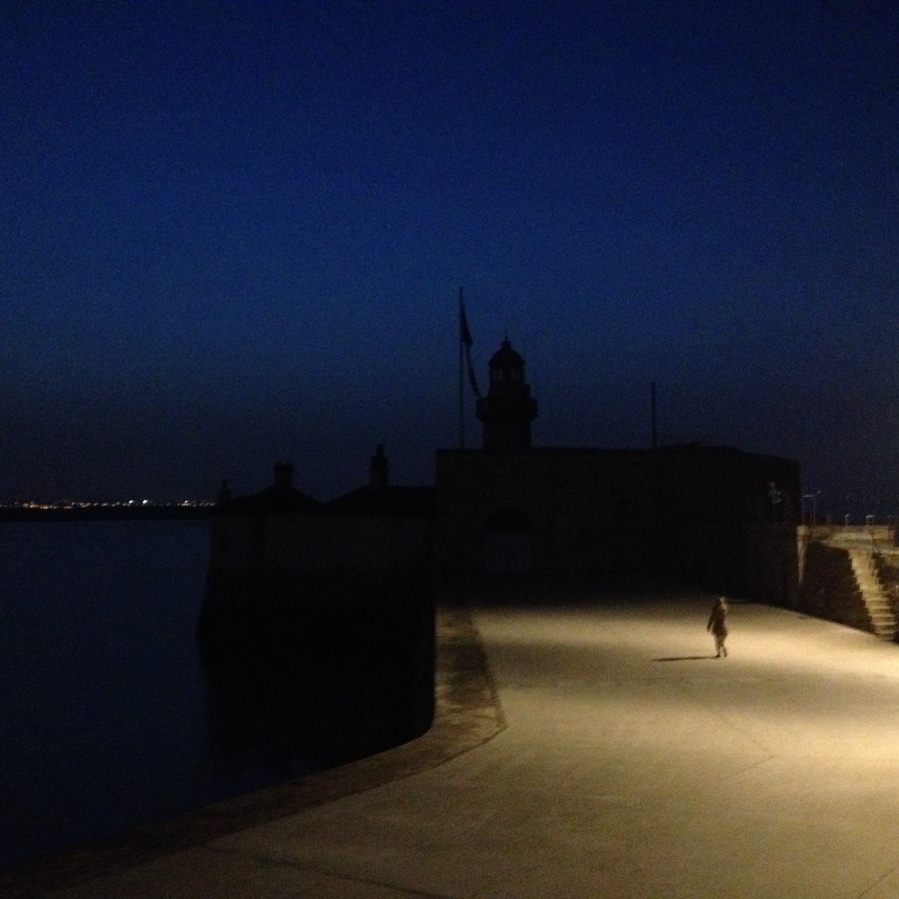 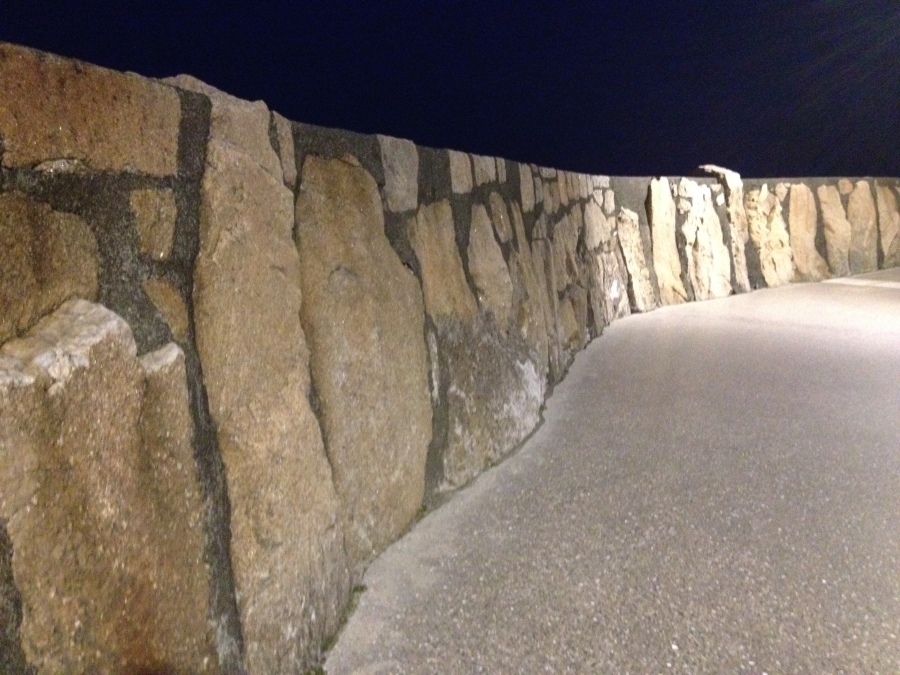 I found it immensely pleasing for example,  the way the wall meets the terrazo-style polished cement of this floor.  Something a bit “yellow brick road” about it, would you agree?   The way the other cement , on the wall itself, between the granite blocks, has been redone is another matter.  The words brutal, and “slapped on” spring to mind.  Take some pride in your work chaps.   Still, let’s focus on the positive this evening.  Look at where the wall and floor meet look at that attractive, sinuous curve.   Hummmm….  Nice.

The numbers painting on the granite blocks also appeal. 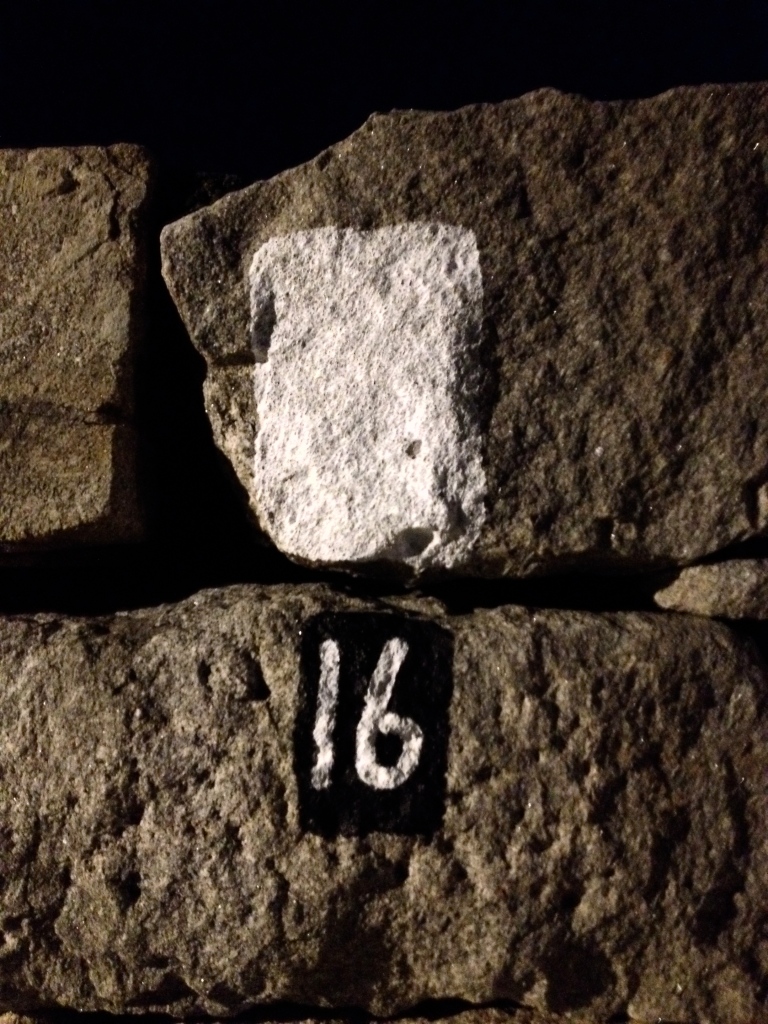 The lights in the harbour, and in the town beyond, also put on an attractive, twinkly sort of show. 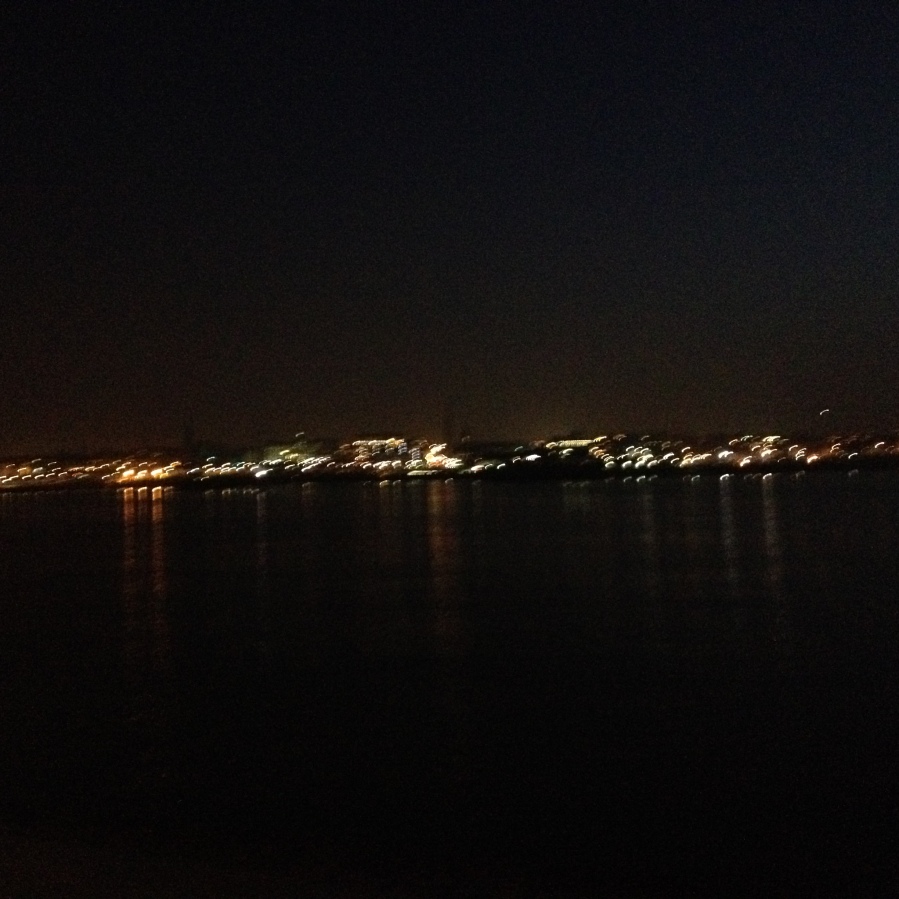 Yes, it was time to indulge in my new trick, the panorama shot.

Or alternatively, stare at rocks.  Not as dull as it sounds. 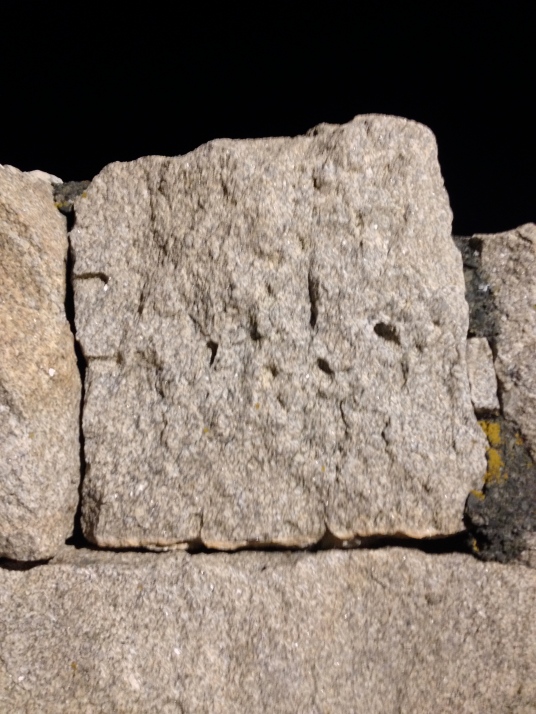 especially if odd rock-men keep staring back…    Look at this guy. 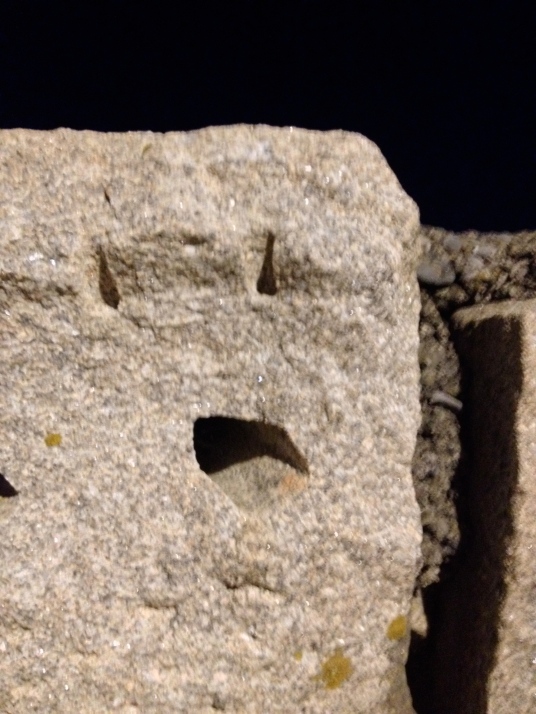 What is he so alarmed by?

Then there are the monuments, if I’m allowed call them that.  “Street furniture” doesn’t seem quite right.  (It’s not a street, for one thing)  This splendid Victorian promenade boasts a bandstand, and a sort of giant,19th century cast iron & glass canopy, and various other delights.  I neglected to snap a picture of the bandstand,  but given the balmy night, definitely felt there should be a couple dancing on it.  Dancing tango perhaps.  Why not?

The there’s the weather station, with its whole Greek revival, Doric temple sort of style going on. 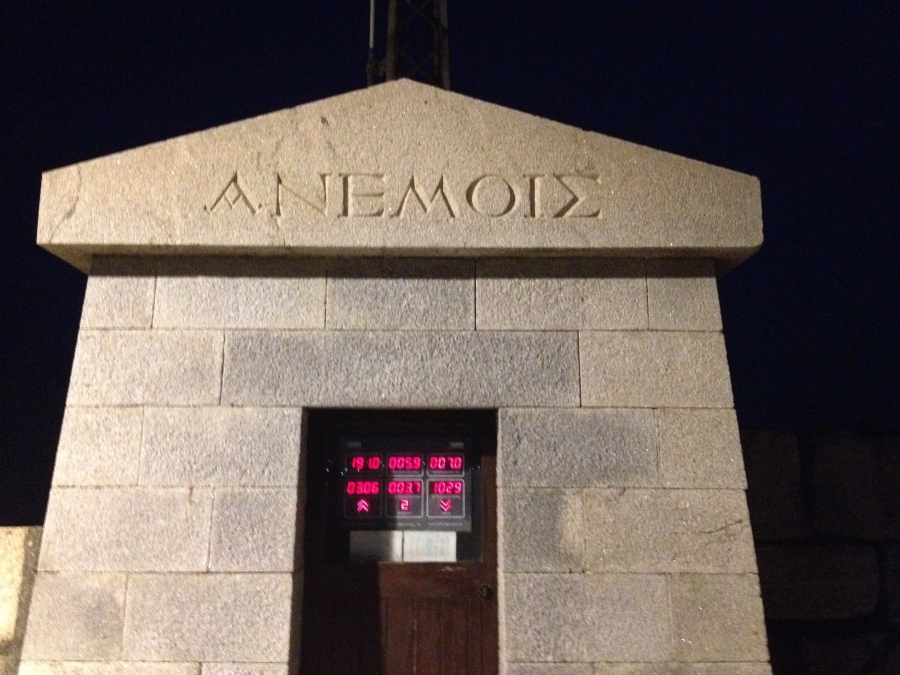 and the memorial to brave, doomed Captain Boyd, RN,  and his heroic crew, who all perished trying to save sailors off another ship floundering in the harbour, during a vicious storm the winter of 1861. 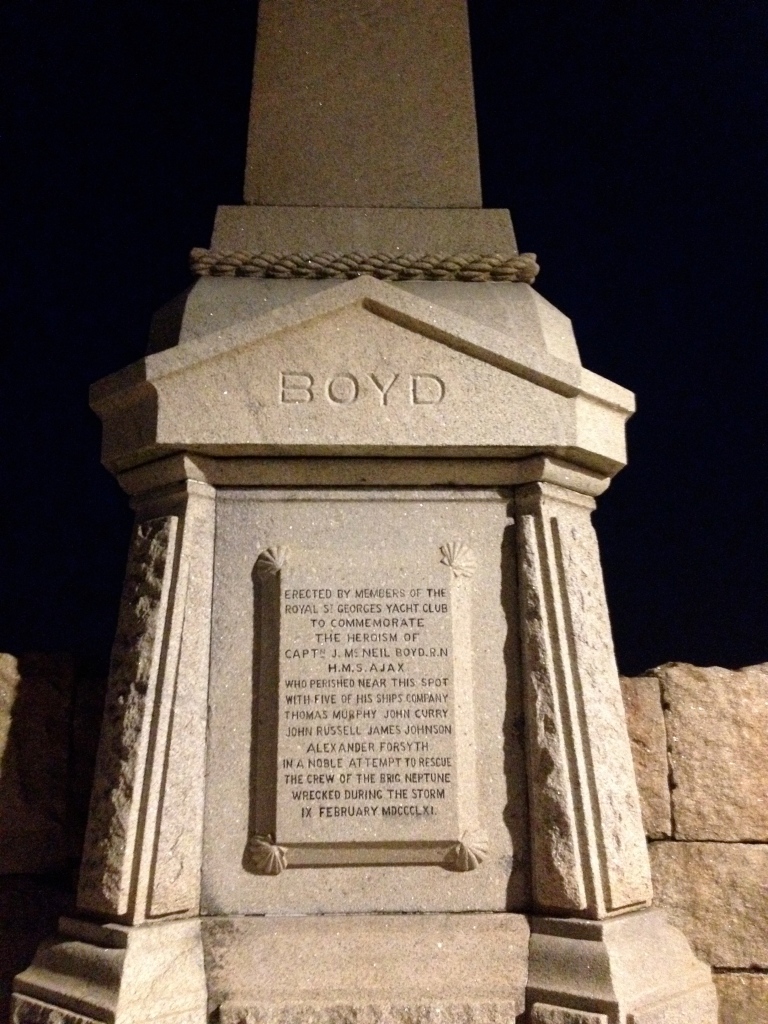 I did a daylight post on the East pier last year, and promised to write more about this Victorian hero, and the adulation his deeds and death inspired.  He connects some of my favourite places in Dublin.  Saint Patrick’s cathedral has a fine statue; the wonderful Maritime museum in Dun Laoghaire, in the old mariners’ church; the pier itself of course, and the harbour it encloses, where the whole tragedy was played out.  Someone told me recently the bodies of the crew, when they were recovered, were buried in graves around the area behind what is now the Tara tower hotel, on the Booterstown Road, near the marshes and the bird sanctuary.

That’s it for now.   For those who like city walks, pointed arches, John Ruskin and 19th century details, there’s a Victorian tour of Dublin city centre mooted for Sunday afternoon (2-5pm approx)  email dublindecoded@gmail.com to reserve a place. 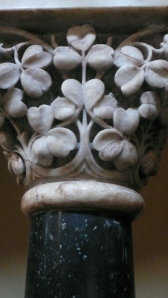 If you would like to book or simply join one of our unique,  sociable and highly informative tours, go to Dublin Decoded  to see the tour menu and then hit an individual “tile:” to see more information on individual tours and tour dates.

Remember if you are in a group of 4+ people, you can simply book your own tour, any of the Dublin Decoded tours.  All you do is drop is an email anytime, with your preferred dates and choice of tours to  dublindecoded@gmail.com

If you’re solo, and you’d like notice of scheduled tours, to which all and everyone is welcome, the best strategy is to Like and follow the Dublin Decoded Facebook page where we announce all up-coming walks and tours.

and/or follow  “Arran Dublin Decode” on Twitter, where we also announce any upcoming walks and tours.   Rave reviews and new testimonials, of both our walking tours and our famous How to Read a Painting workshop (twice a month at the National Gallery of Ireland)  appear regularly on TripAdvisor. These reviews can be seen here. 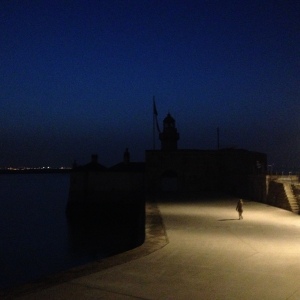