Digging around for a reference to Joyce for my 1-hour Zoom talk tomorrow, I came across this old, 2013 blog piece (which was badly in need of an edit, now done). It briefly covers maps, games and puzzles, within Joyce and Modernist literature. I repost it now in honour of Bloomsday tomorrow.
Our Zoom talk tomorrow afternoon meanwhile, by contrast, doesn’t focus exclusively on Joyce or Leopold. It ranges widely, being all about the Markets and Monasteries area west of Capel Street, in its many aspects. But we will encounter, and briefly discuss, the locations for two very famous key scenes in Ulysses.
Tickets €12 and still available today, and tomorrow morning, (until a couple of hours before the 2.40 talk).
You’ll find the links and all the info as always, on the Zoom talks page of our “other” website. Dublin Decoded.
Join us if you can!

Back in 2013, I invited readers of my blog to identify this mysterious looking map, below. 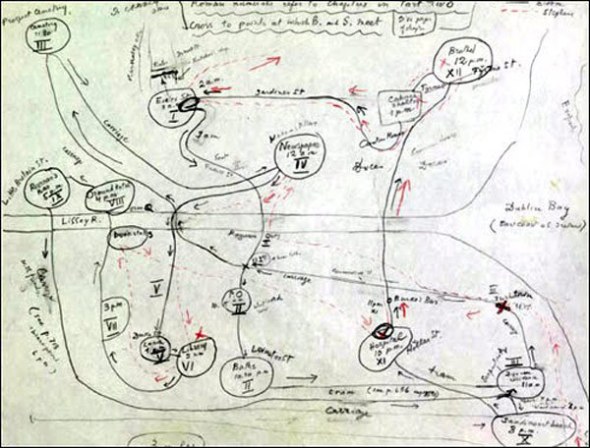 As many people either knew or guessed, it’s a sketch concerning Ulysses, the legendary novel routinely claimed as the best or most influential tome of 20th century literature, and written of course by James Joyce (below).

I had come across the drawing a few weeks previously, while researching my walking routes around Dublin,  routes which often reference that iconic novel, Joyce’s work in general, and indeed places that featured in the writer’s own life in Dublin.

As one or two readers also knew, this particular map was drawn- presumably as an aid to study- by another great novelist, the Russian writer Vladimir Nabokov, of Pale Fire and Lolita fame.  (pictured below)

Like many 20th century writers, Nabokov was greatly influenced by Joyce.  Indeed, he was not adverse to some Joycean playfulness…