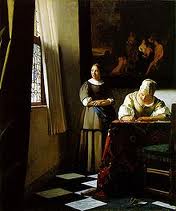 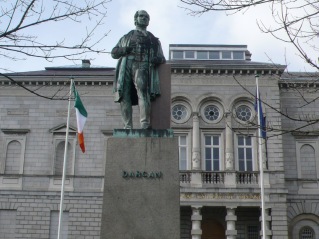 The history and origin of the National Gallery of Ireland are somewhat unusual because it was founded as sort of afterthought or consequence of the Great Dublin exhibition, 1853.  This was one of the spectacular trade, arts and industry Great Fairs characteristic of the 19th century.  The Great Dublin Exhibition was also itself unique in turn, being single-handedly funded by the great Irish railway magnate, William Dargan.

Dargan, an engineering pioneer, who Dr Marie Bourke has also described as “a patriot to his fingertips”  was so passionate about promoting Irelands arts; crafts; trades and industry he had approached the Royal Dublin Society, back in 1951 and agreed to underwrite the entire cost of this exhibition.

This cost was originally estimated at around £100,000.oo.  But by the time the Great Exhibition opened, just two years later, costs had risen to an eye-watering £400,000.oo, (It’s notoriously hard to translate values, but i estimate that’s at least around £87 million sterling in today’s money)

above & below: contemporary images of The Great Dublin Exhibition, 1853.  Courtesy, Archiseek.

Dargan also sourced a core exhibition of paintings for the arts section of the exhibition.  Most of the whole spectacular show was held in a gigantic, specially glasshouse (like the Crystal Palace in London) which stood, or rather towered, over Leinster Lawn.

This is the garden or lawn in front of Leinster House, a grand Palladian mansion previously home to the Duke of Leinster, and now the Dail (our Irish Parliament) but at the time of the exhibition, home to the Royal Dublin Society, (commonly called the RDS). 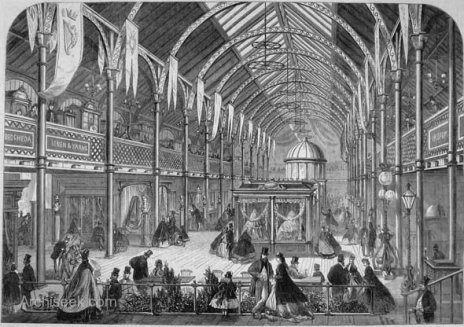 As the exhibition ended it was agreed to continue Dargan’s legacy, and that Ireland should have a permanent collection of paintings; as London, Paris, and other great European cities had. (Dublin never being slow to identify itself as a great European city!)

An architect called Fowkes was employed.   The main design criterion given to him seems to have been (very sensibly) that the façade and shape of the new building mirror or reflect that of the Natural History Museum, on the other, West side of Leinster Lawn, (by another architect, Claredon) which had opened several years earlier.

This on-going concern prompted an Act of Parliament,  setting aside a grant of £1000 per annum for the purchase of works for the gallery.  This was a start, however, even at Victorian prices, it was not a vast amount to compete in the international art market.   So the gallery was always under pressure financially, and always struggling to fill its walls.

Relief came some 40 years later,  in 1901, by way of the Milltown gift, from the Countess of Milltown: the widow of the earl of that name and the owner of Russborough House.   As her bequest  was so large the gallery now encoutered the opposite problem, as  it necessitated building a large extension.    This addition, is now the central part of the NGI and called the Milltown Wing.  It is closed at present but normally houses the Irish collection, in a splendid “enfilade” of rooms, starting directly opposite the usual entrance of the gallery on Merrion Square.

The NGI extended again60-odd years later,  this is the eastern part of the gallery, built inin 1968,  and renamed and knownsince 1987 as the Beit Wing.

Curiously, there have been two very significant gifts from two different, completely separate owners of Russborough House (in Blessington, Co Wicklow) in the history of the National Gallery.  As we’ve seen, the Countess of Milltown made a large gift and then in the 1980s, the later owners of the very same house, the Beits, made a second donation, smaller perhaps, but of very high quality work.  This was in 1987, bequeathed by Sir Alfred and Lady Beit, the Mining millionaires, very enlightened philanthropists (especially in Africa) and famed art collectors.  They made a gift of exceptional paintings in 1987, including paintings by Francisco Goya, and a Velazquez.  Accordingly, the 1968 extension was renamed after them in gratitude.   To complete the “map” of the gallery, a final section, the Millennium Wing, accessible from Clare Street, was added in the early part of the first decade of this century.

Other significant donations to the NGI include those previously made by Sir Hugh Lane (below)  who had been director of the National Gallery from January 1914 until his tragic untimely death on the Luitania in April 1915, (below portrait of Hugh Lane by John Singer Sargent. 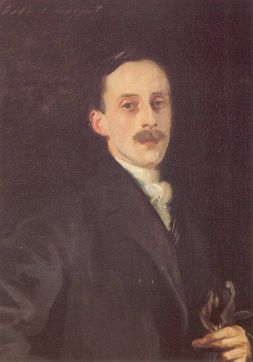 then more recently by Sir Dennis Mahon, and in the 1950s, the all-important George Bernard Shaw Bequest. 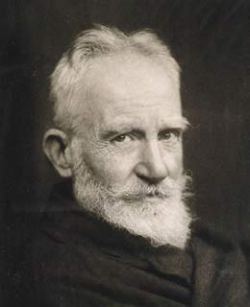 Shaw is a vital figure for the NGI. He bequeathed a third of his royalties to it.  Since these included revenues from all performances of his plays, adaptations of his work into films, including My Fair Lady (based on Shaw’s Pygmalion) this represents a very substantial portion of the gallery’s revenue and one they depend upon.

Shaw, (the only man to win both an Oscar and a Nobel Prize for literature) died in November 1950.  Since copyright ceases 70 years after his death, the gallery will have a much more difficult time from 2020 onwards.

Shaw loved the gallery, having been taken there as a child it is where he sharpened his critical and aesthetic faculties.  He never forgot the place and often said it was his first real university.

Today, the National Gallery holds works by all the major European schools, Italian, Spanish, French, Flemish, Dutch and British, and even a few works from Russia and from the United States. The gallery as you might expect, also holds the single most important collection of Irish Art in the world.

The National Gallery received a storm of international publicity in 1993, when it received on long-term loan a rediscovered Caravaggio painting “The taking of Christ”.  The existence of this stunning Baroque masterpiece had long been known about, but it been believed lost and probably destroyed.  But it had been misattributed to a Dutch artist Gerlad Van Honhorst, bought in the 1920s by an Irish widow on a trip to Scotland, passed to a community of Jesuits in Dublin, then ended up more or less forgotten, hanging in their dining room in Dublin!  Eventually, somebody wondered if they should have the funny old picture over the mantle piece cleaned and (thank goodness) asked for expert help.  Sergio Bendetti, an Italian art historian and curator who works at the National Gallery, was asked to have a look.  Bendetti is an expert on and lover of Caravaggio.  One can only wonder what his reaction was when he saw the picture hanging in someone’s dining room.  One does not generally expect to find a Caravaggio casually hanging around in Dublin sitting rooms. 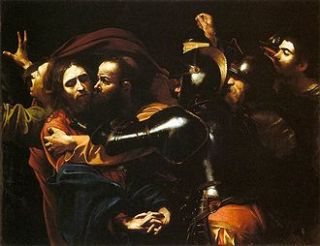 above  and below (detail) – The Taking of Christ,  1602, Michaelangelo Merisi de Caravaggio. Images courtesy National Gallery of Ireland website, all right reserved.

So, miraculously it was rediscovered, recognized, and tested for verification, and lovingly, gratefully restored.  It is now on indefinite loan to the Gallery.

That is the good news.  Here is the bad news, so to speak.  The NGI, having duffered decades of neglect,  is currently undergoing major structural refurbishment.  This means the majority of the gallery is off-limits and exhibition space is severely curtailed at present.  Many works are in storage or out on loan, and the traditional Merrion Square entrance is closed as work proceeds.

But do not despair dear reader.  There are still fine things to see.  A selection of the paintings, effectively the  “highlights”, called “Masterpieces of the Collection” including of course the famous, iridescent Caravaggio, is on show in the newest part of the NGI.  This is in the Millennium Wing, accessible from Clare Street.

The prints are also on view, off a central atrium, as small sculpture gallery and a medium sized space for temporary exhibitions.  The current exhibition in this space deals with the notion of painting in a monochromatic range and has the “racey” or suggestive sounding title (read tacky) of: “Shades of Grey”.  Yes I know.  Despite this somewhat ridiculous title, this is actually a rather fine, thoughtful exhibition.  It is certainly useful and thought-provoking to be invited to consider paintings in terms of their formal qualities (such as colour)  as well as from the viewpoint of (as is more often the case) theme or subject matter.

There is of course a café/restaurant at the NGI, a cloakroom, storage, toilets and baby changing facilities and all the usual bells and whistles available.  The gallery is a popular spot for lunch and coffee meetings.

The opening hours of the National Gallery are:

Go, visit and enjoy.  You hardly need a guide to enjoy this gallery but, for those who like a bit of commentary, or would like to use the pictures in the National Gallery as an introduction into iconography, (the art of recognizing saints and understanding symbols) I lead a little tour called “how to read a painting” in the National Gallery twice a month.  (usually one afternoon and one Thursday evening per month).  I generally ask about €20 for adults, (€40 for a family, 10 for students)  You can email me at arranqh@gmail.com to enquire, or to book any Thursday evening, including in September or October.

But whenever and however you go, you will be sure to enjoy this wonderful institution: the “real university” of George Bernard Shaw. 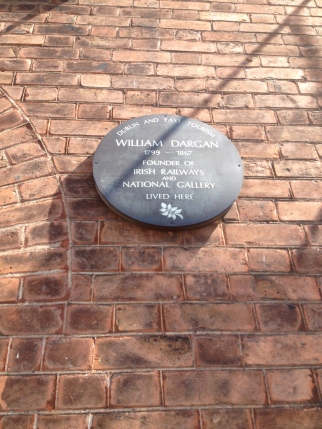 Above:  a plaque today, on the former home of William Dargan, FitzWilliam Square, Dublin.

4 thoughts on “William Dargan’s legacy: the National Gallery of Ireland.”