the ancient city of Kilkenny lies on the west bank of the River Nore as it runs North to South.  The southern end of the town is dominated by the huge Butler castle, while to the north, just outside the lines of the old city wall, towers St Canice’s Cathedral. 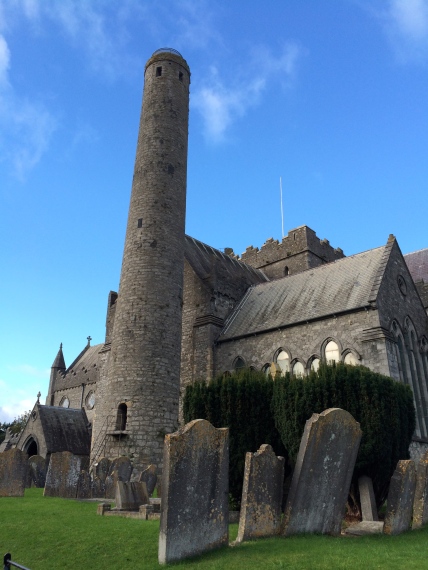 The geography is clear from this excellent map, courtesy of the historians and archeologists at the wonderful Rothe House project, visited in my last post.  The medieval street plan is still largely intact throughout the town.

With the arrival of the Anglo-Normans in Ireland from 1169, beginning i this very part of Ireland, attracted the great continental orders to the country and as you see below, the old Franciscan, Dominican and Augustinian Religious Houses all survive to this day. 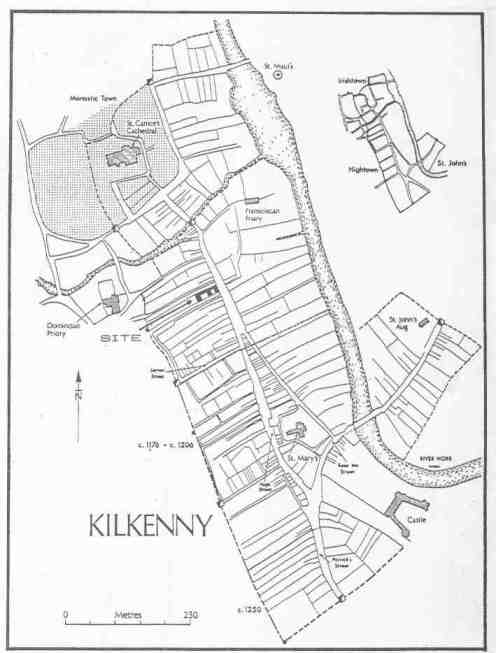 Here’s a second map, below, this time from the superb Historic Towns Atlas of Ireland, a huge scholarly undertaking sponsored and driven by the Royal Irish Academy.

Christianity came to these parts around 402, and just over a hundred and ten years later St Canice founded a church on this site, which gradually grew in size and importance.  The status of the site was further marked by the construction of this huge tower alongside the cathedral in 1111 and the site finally becoming a cathedral – the seat of the Bishop of Ossory- just a few years later, in 1120.

The Anglo-Norman Conquest followed soon after and as the Normans replaced the old Gaelic elite, certainly in this part of the country, regime change is often apparent in more continental architecture styles, and indeed in surnames.  Construction on the present structure began 1202, under Bishop Hugh de Rous.   It has of course been repaired and partially reconstructed several times, notably after the central tower collapsed. (where the arms of the cross meet, in the centre of the building as you see below)

The graveyard incidentally contains many wonderful funerary artifacts,  I was struck by this one, below, with its extraordinary egg-like form. 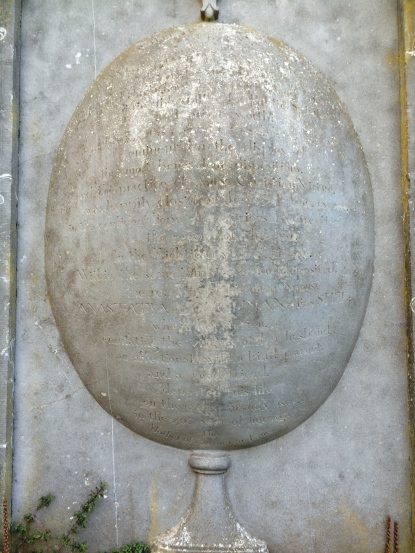 As you explore the graves, the tower looms overhead, more or less daring you to climb it.  This is one of only two such towers in Ireland it is permitted to climb, so I felt I had to accept the gauntlet.  The steep wooden steps, almost more of a ladder than a stairwell, could be a challenge for some people,  and their were moments when i felt i was in an Alfred Hitchcock film (that one called Vertigo)   But the experience and view were well worth it, and I’d heartily recommend this climb to anyone visiting the marble city.

The amazing view from the top of the twoer also gives a clear picture of the architecture of the cathedral just below.  That square tower top right of picture below,  is of course the one that collapsed in 1332. 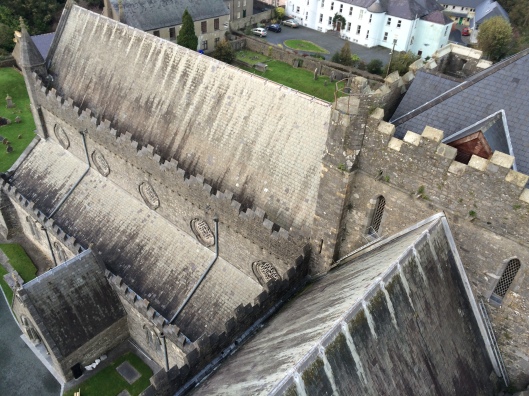 and of course, at this stage I couldn’t wait to get inside the interior of the Cathedral itself.   After an equally breathless decent back down inside the huge tower, I finally entered   One isn’t disappointed..  Look, for example, at that wonderful wood arched ceiling. 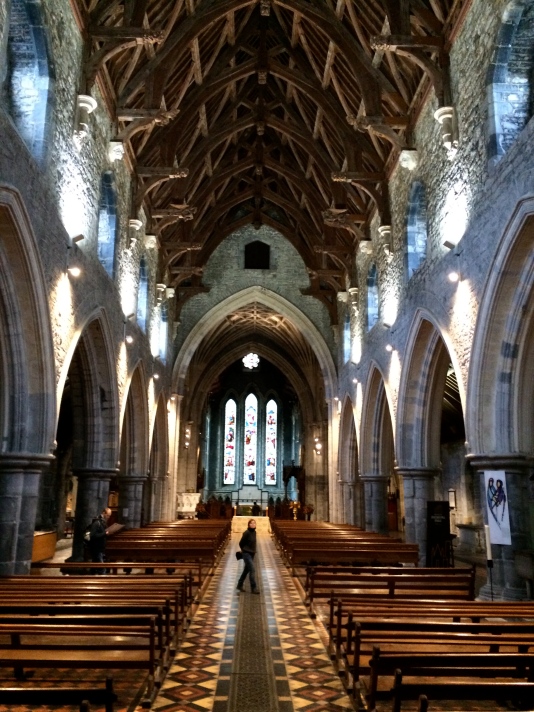 Regular readers here will know I’m fairly besotted by medieval art and architecture wherever I’m lucky enough to find it, be that around France, or further afield,  or right here in Dublin.  I lead medieval tours here and have written quite a lot about the architecture and artifacts in places like Saint Patrick’s Cathedral here.

There are a few fascinating medieval tombs in Dublin, notably Archbishops Falk de Saundford’s tomb in St Patrick’s, the Portlester memorial in St Audoen’s and the Fitzgerald/Purcell one in St Werburgh’s.  Galway’s old church of Nicholas also has some wonderful pieces, and no doubt there are others around the country I’ve yet to see.   But nothing I’ve seen so far in Ireland quite prepared me for the quantity, quality and beautiful state of preservation of the medieval tombs inside St Canice of Kilkenny. 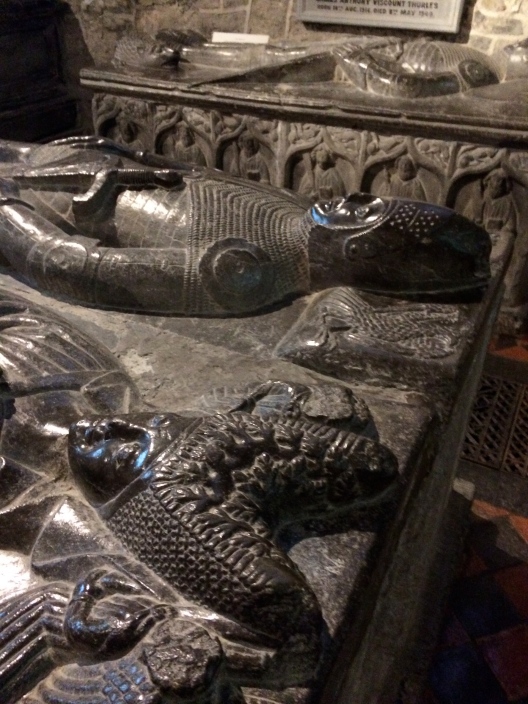 Look at this one above for example. for heaven sake…  Very beautiful, all that wealth of detail,  and especially in that gleaming black Kilkenny marble.

It belongs to a lady called Honoria Grace.  If you read my previous post, you’ll have seen that in the centre of the city, the remains of her family’s medieval castle now form the old prison cells under Kilkenny’s 18th century courthouse. 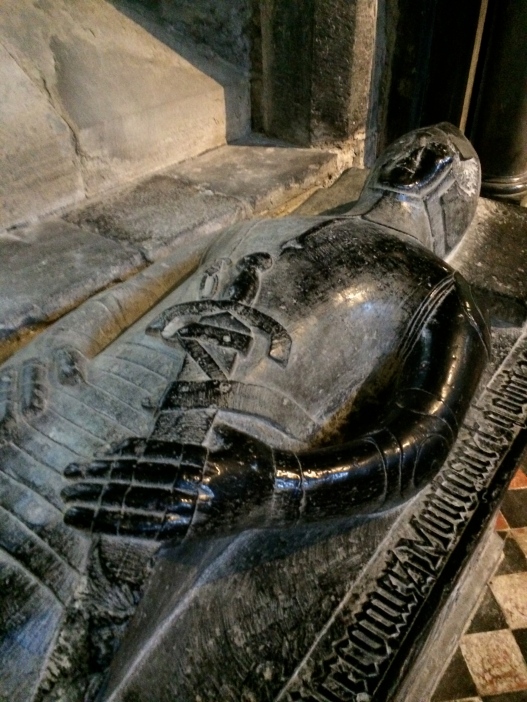 above:  their second son:  Richard Butler, died 1571.  Yes, elsewhere in Europe that would perhaps be the Renaissance.  But not in Ireland, as you can clearly see this is still in the full medieval style and sensibility.   The information plaque informs us he was the First Viscount Mountgarret,  a new title created for him, as he was himself a second son, of the 8th earl of Ossory, so presumably his elder brother inherited that old title., while Richard here went off to found his own dynasty.

By the the late 1500s and 1600s the Butlers  had overtaken the Kildare-Fitzgeralds as the most powerful family in the country. The main Butler brach were eventually raised to a Dukedom, under James Butler Duke of Ormonde, who was twice Viceroy of Ireland and the leader of Confederate Ireland, during the terrible 17th century wars.   Kilkenny was in fact the capital of Confederate Ireland in that turbulent time.    But if memory serves me right, the two Butler branches actually clashed, at least once, in battle, with James Ormond fighting his cousin Viscount Mountgarret, a descendent of the same man you see above.

By the way,  there’e something else I love about Richard Butlers tomb.   At one end is the noble warrior head…

But look at what lies at his amour-clad feet!

You have to love this dog.  As the nobility of the time were obsessed with hunting and hawking and dogs and horses, I’m sure it was a real and favoured mutt.  But a dog of course is also a symbol of fidelity.   At the feet of a noblewoman, it usually denotes fidelity to her husband, who may be away on campaign, at war, or on crusade, or perhaps politically embattled.  At the feet of a man, perhaps it is more likely to denote loyalty to his king or his cause.    Either way, this particular dog verges on the bizarre.   Loyal and fierce, yes but it looks more like some dragon or giant salamander!   I love it, guarding his master, even in death. 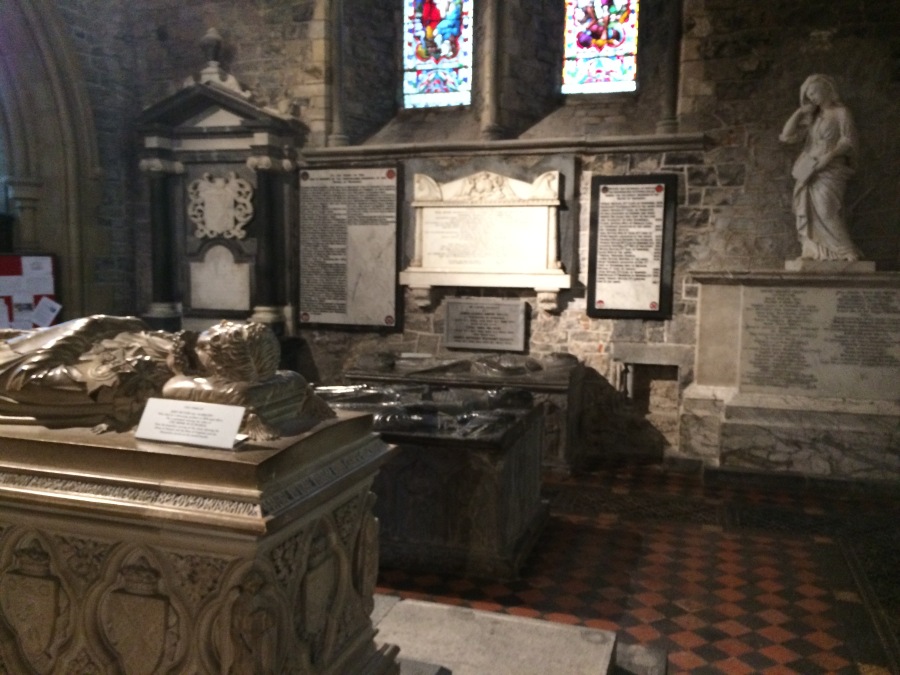 Above, Butlers,  who were of course not just the local magnates and dynasty, but the most powerful family in Ireland as a whole.   It makes a difference.  For example the only really genuinely sophisticated Renaissance portrait I’ve ever seen here, equal to something in France or Italy of the same period, was of a member of the Butler family.  Only they could afford to entice and import an artist of that caliber from overseas.   Am I also right in thinking Anne Boleyn was supposed to come to Ireland and marry a Butler?  Before she caught Henry VII’s eye of course.  (and we all know where that led… )

The sides of the tombs are also wonderful.  Nearly all of them are decorated with carvings of the Apostles.. 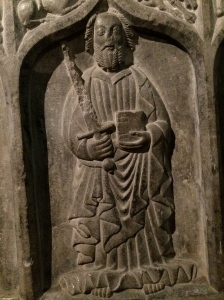 Apart from members of the Grace family and an awful lot of Butlers, there are also one or two members of a family called Whyte here, like this fine old knight warrior in the picture below.  My mother’s maiden name is Whyte, spelt the same way, and her father’s family are a long time in Dublin and Ireland.  So of course,  I’d love to imagine some vague connection, but really in  all honestly I’ve no idea if there’s any connection.   But its nice to imagine.  Who wouldn’t want to be descended from a chap like this?   He looks like he’s about to get up and go straight out on crusade right now.

Perhaps I’d better leave it there!  If you’ve enjoyed it, please leave a comment, it’s always great to hear from readers.  Many thanks for your company.  – Arran.