In John Rocque’s famous 1756 map of Dublin , we can see Luke Gardiner the elder’s new Sackville St, with his “Gardiner’s Mall”  in the centre.   It was where O’Connell St Upper is today (Running North from Earl St to Parnell St)  It did not run south of Earl St.  There instead, was a much smaller street, known as Drogheda St.  (named after Henry Moore, earl of Drogheda)    Even this smaller, lower street didn’t quite reach the river or the city quays. 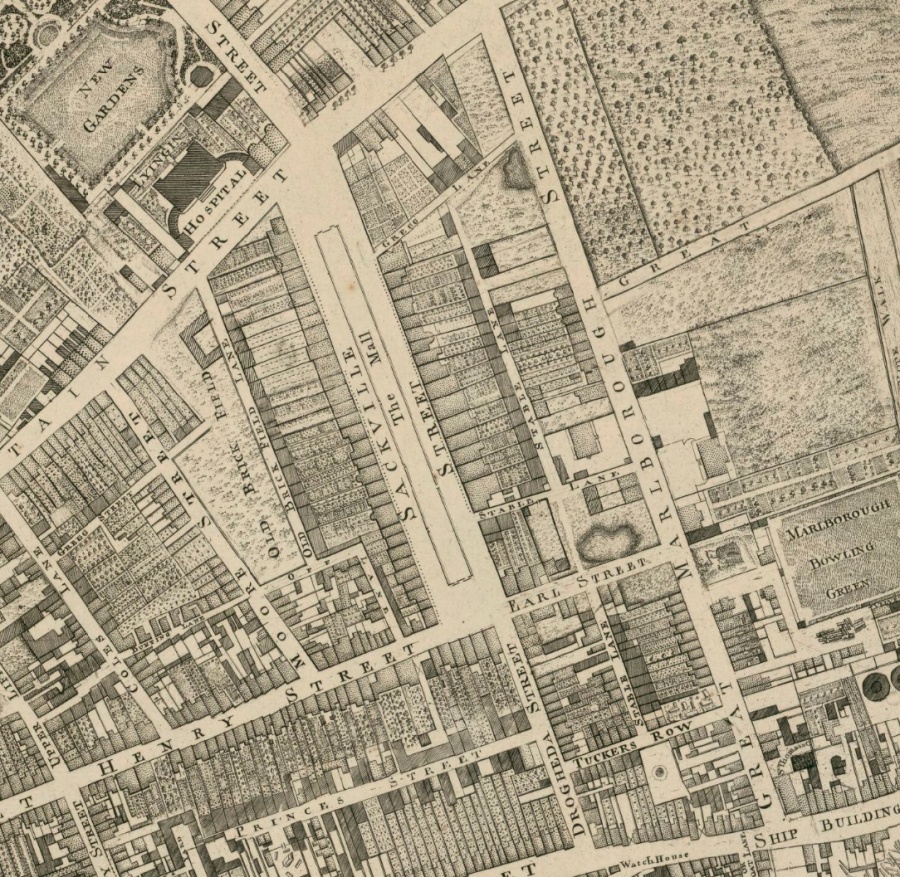 Luke Gardiner the elder’s new Sackville St was a fine broad street, and exclusively residential (rather than commercial or retail as it has been for the last 150 years)  It was instead flanked by fine, red brick Georgian private houses. 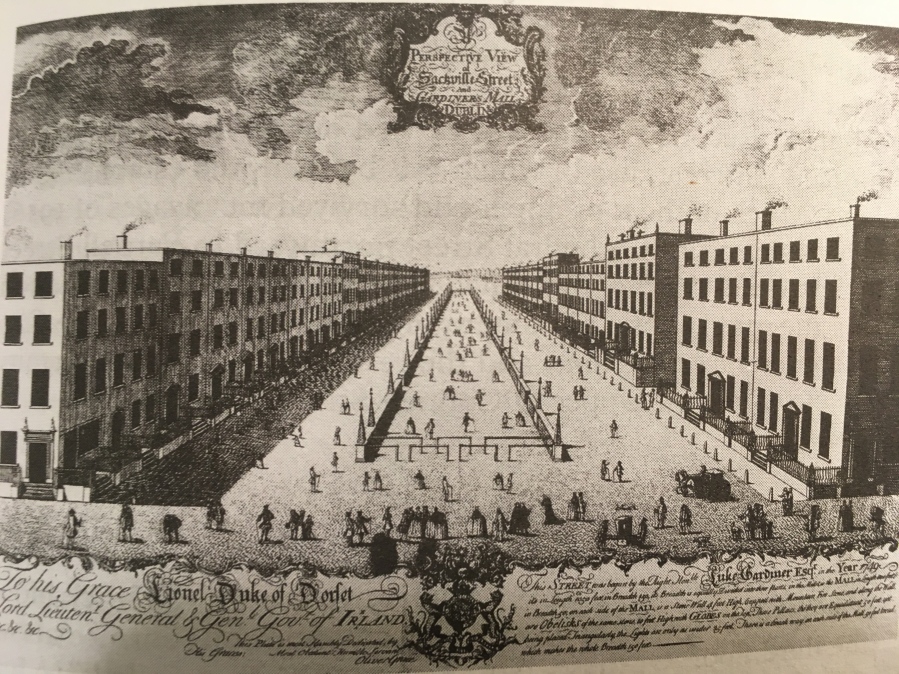 However grand Gardiner the elder’s new street was,  with his “Gardiner’s Mall”  in the centre, for the wealthy to meet, mingle and promenade, if we pull out to a wider shot of the immediate area, and look at Rocque’s map again, you’ll see there was very little development east of Sackville St.

Marlborough Street is there.   So too is Earl Street.  But it only runs the short distance as far as the corner with Marlborough Street.  After that there are only private gardens, the Marlborough Bowling Green (one of several in the 18th century city) Great Martin’s Street and Mabbot Street.  Apart from that and beyond that, especially to the east, there is almost nothing, except empty fields, gardens and outlying orchards.

By 1798, just 42 years later, all this has utterly changed.  The Gardiner estate has been transformed with massive development, dozens of new streets and lanes, and thousands of new houses. 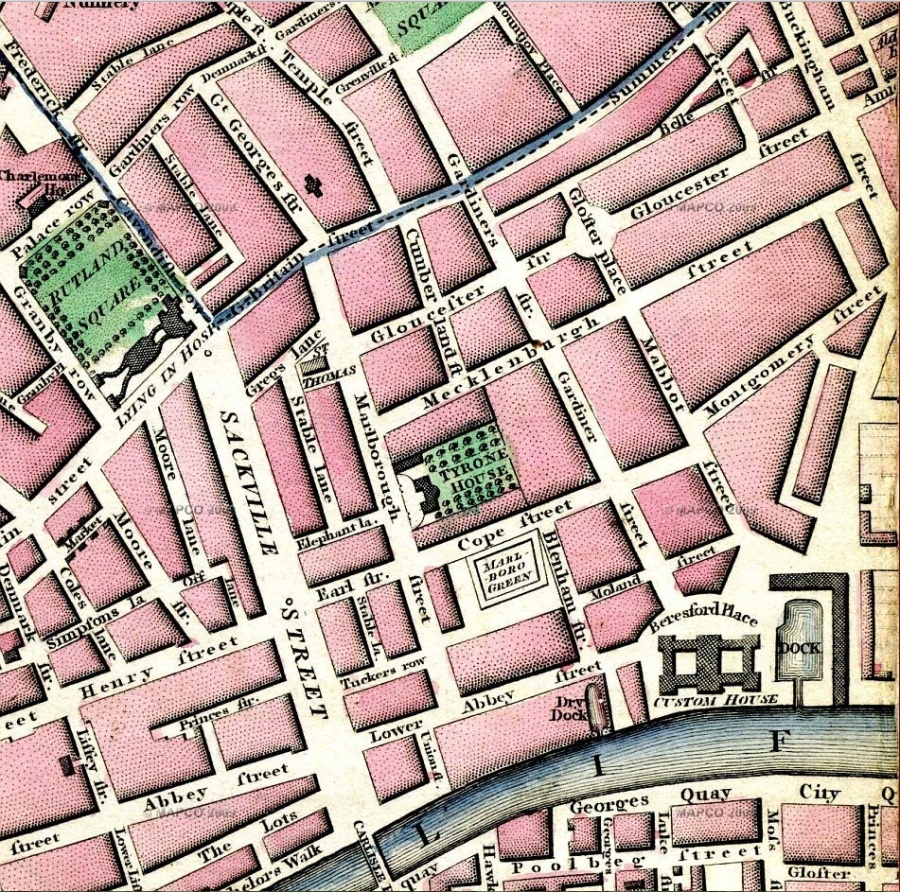 This is a detail from the 1798 map by Bernard Scale. It was based on and built on Rocques 1756 survey.   But now as you see there are scores of new streets, including several named for the Gardiner family themselves such as Gardiner Row (top left) and Gardiner Street.   Not to mention Mountjoy Square, which you can see a tiny corner of,  peaking in at the very top (North) of your picture above.  (Mountjoy was the title granted to Luke Gardiner the younger, making him Viscount Mountjoy)

But the street we’re most interested in today is the one you see running on an east-west axis right horizontally through the middle of this picture, just to the east of Sackville Street, namely Mecklinburgh Street (sometimes spelt “Mecklenburgh”)  In this image you see it running from Buckingham St in the east, the whole way to Marlborough St in the west.  Along its length it traverses Gardiner St.   But not for long!

Well I say “Not for long”.  But in fact in it did so for over a hundred years, and across 3 different centuries.   For example, it still reached Marlborough St in 1843, as we see in this detail of a OS map from that year.  (All historic OS map details are reproduced courtesy of the historic layers website, the link is at foot of article)

Likewsise,  notwithstanding a change of name,   to “Tyrone St”  this thoroughfare is still reaching Marlborough Street in the 20th century,  as we note in this detail from the 1912 OS survey:

It was called, or rather renamed Tyrone as a nod to Tyrone House,  the aristocratic residence lay immediately south of it.  (Built by the German-born architect Richard Castle in 1740)

As you can see in both the 1843 and the 1912 details, by the mid-19th century the earl of Tyrone (the Beresford family) had departed and the site was home to Commission of Education,  (later renamed the Department of Education) and later also home to their project, the new Model Schools  (clearly marked in both maps)

Don’t be put off by the large “RC Cathedral”  title apparently on that site in the 1912 detail:  the Pro Cathedral of course sat on the other (west) side of Marlborough St.   Just as it does today.

The main point however is that, regardless of name changes, Mecklinburgh/Tyrone Street continued to link to Marlborough St.  But how long can this useful, convenient state of affairs continue?

Well, a least another 20 years it seems.  Right through the Great War and the Revolutionary Era, and into Irish Independence.   Because here’s another detail, of another OS map, this time from 1938.

There are two things you will notice straightaway.  One is that the name of our street has changed yet again.  After a long stint as Mecklinburgh Street, and much shorter stint as Tyrone St, our street has now acquired not one, but two new names.     East of Gardiner St it is Railway St, the name it still bears today.  But west of Gardner St it appears as Waterford St.

Why was the Tyrone name abandoned, after such a short time?   Perhaps when somebody recalled as the 1798 United Irishman rebellion had crumbled, and the militia and yeomen rounded up and hung rebels,  Marcus Claudius Beresford personally supervised the torture of prisoners, in his stables at Tyrone House. *   Perhaps in the Independence era therefore, Tyrone as a place-name may not have seemed quite so attractive anymore.  Hence the change?   That would be my guess anyhow.

Waterford Street, alas, will not endure.  In the late 20th century the Model School site additionally becomes home to the Department of Education, and the extended site is pushed North, building over the land once crossed by Waterford St. 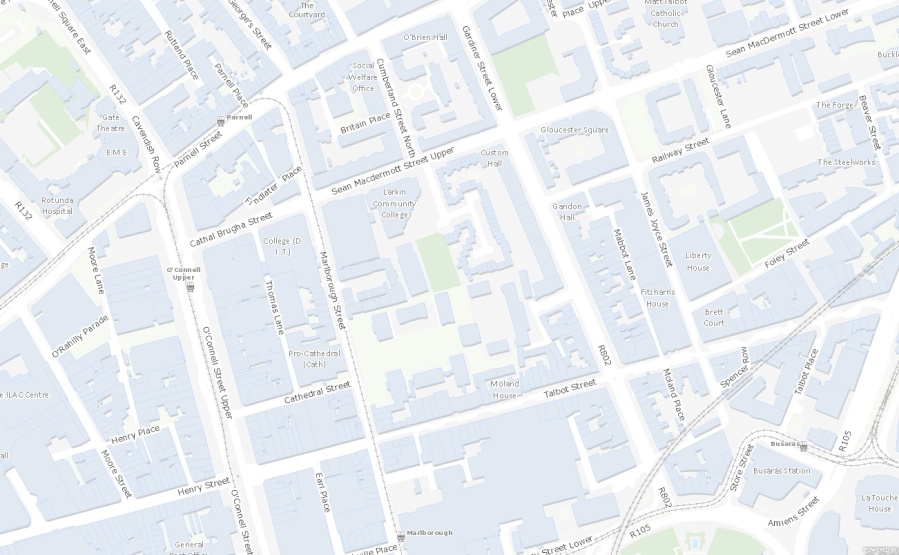 Doubtless this change made eminent sense to the people who decided it.   But in strictly city planning terms it now looks a very poor decision, creating a huge, impassible city block with no direct access to the immediate west, and thus to O’Connell St,

In days gone by, pedestrians and locals could walk west along Mecklenburgh/Tyrone/Railway/Waterford St.,  the whole way to Marlborough St, turning left there, then quickly right again, onto Cathedral Lane (a rather beautiful short street flanked by George Papworth’s fine cathedral building) to connect usefully and conveniently with O’Connell St.   Not any more.  Now Railway Street ends dead when it reaches Gardiner St, forcing pedestrians to walk long this busy, traffic-clogged artery, instead of continuing on directly to O’Connell St via lovely Cathedral Lane.    It creates a huge “dead zone” around the school, and also makes Cathedral Lane slightly cut off, far quieter than it should strictly be.  Poor planning as I say, in ergonomic and walking-transport- planning terms.

These decisions are long-lasting and almost impossible to reverse.  They should really only be taken by qualified, experienced planners, never at the whim of some minister or civil servant.  Not without extensive consultation, and the most expert advice.

The battle of Dublin in 1922 in the Irish Civil War saw huge damage to the east side of Upper O’Connell Street, including fires that destroyed the Gresham hotel and the surrounding buildings.  This created an opportunity after the war to push through Gloucester St (now Sean McDermot Street) right through to O’Connell St.  The new section is now fittingly called Cathal Brugha St. since he died near here.

Brugha, despite his intransigent reputation, had in fact at first displayed surprising moderation, urging others in the anti-Treaty side not to take up arms against the new Free State government.  Notwithstanding this, Oscar Traynor and other decided to occupy the Northern section of O’Connell St, hoping to force the Free State government to negotiate.  Brugha was appointed commandant of this garrison.  But the Free State government as in no position to negotiate, coming under huge pressure from the British to suppress the anti Treaty side and face down the occupation of the Four Courts.  Far from negotiating the “Treaty side”  instead started shelling both the occupied Four Courts and the occupied buildings on O’Connell Street.  As the O’Connell Street buildings caught fire from shelling, Oscar Traynor and others started to retreat.  Cathal Brugha however, never short on simple physical courage, refused to surrender or retreat.  Instead he left the buildings and walked straight towards a position of Free State soldiers, “brandishing a revolver”  He was shot in the leg, the bullet severing an artery.   He bled quickly to death.

Whatever his faults may have been, Brugha was undoubtedly a principled and physically courageous man, who gave his life fighting for Irish Independence in the way he believed it should be delivered and understood.   It’s only right and proper therefore to name a street after him.  But on a quite separate issue, should this particular street have been created after the Civil War?

You see that from the late 1700s, right up until after Irish Independence, a church stood at this spot.  St. Thomas.   It was designed by John Smith,  architect of Poolbeg Light House on the Great South Wall,  St. Catherine’s Church of Ireland church (itself on Thomas St, ironically) and the Provost’s House at Trinity College.

St Thomas church was based on the church of La Redentore in Venice, by legendary Italian Renaissance architect Andrea Palladio (from whose name we get the adjective Palladian, meaning the new style of classically-inspired architecture that swept Italy from the 1500s, and Britain and Ireland from the 1700s.

Unfortunately the extension of Gloucester/Sean McDermot St into O’Connell St required the demolition of this church, from its site on te northern section of Malborough Street.

True, a smaller replacement church was built,  just off the new street.  But I always feel it was a shame to lose this beautiful building.

We will be exploring some of these streets and some of these buildings in my walking tour, co-hosted with local historian Terry Fagan,  on Thursday, 8th November (2018) 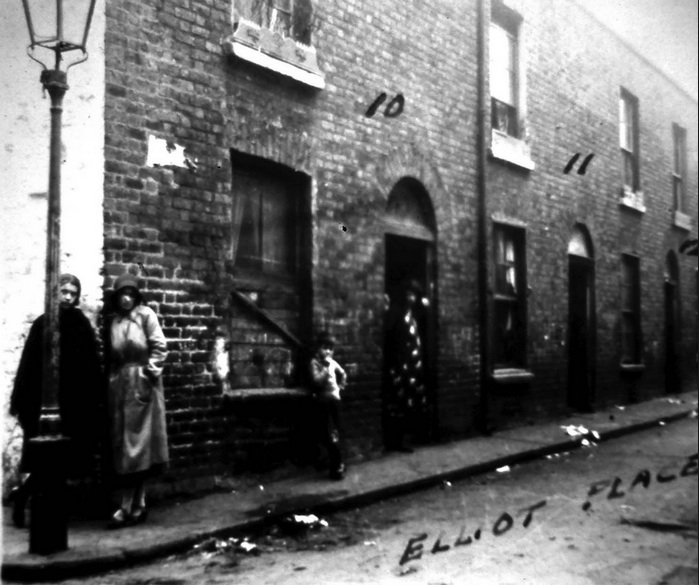 Unfortunately tickets for this walk are sold out.  But we hope to run similar walks around the area next year, in addition to our many other historical and architectural walking tours.    To get the all-important advance notice of all our walks (usually 1-3 of them each month)  the best action by far is to subscribe to the Dublin Decoded monthly newsletter.  The quick sign-up link can be found here.

*  Information about torture at Tyrone House from p. 255, Dublin, the making of a Capital City, by David Dickson.  Published Profile Books, London,  2014.