in the coloured 1798 map above, the tiny, modern-day lane-way known now as Balfe St, very near the busy central shopping thoroughfare of Grafton St. was previously “Pitt St”.   Can you see it above?  If you follow Anne St right to left across Grafton St you’ll spot it.

The name Pitt comes of course from the English Prime Minister and later earl of Chatham, William Pitt.  There were in fact two such men, father and son.  Both earls of the same title naturally but, more unusually, both were Prime Ministers.  This Pitt lane, and nearby Chatham St. were named after the later man: “Pitt the Younger”- as he was always known.  (Ed: After having wrote this on Friday night, a read of Michael Seeley’s super, and very first post on his excellent Wide Streets blog reminds me Pitt Younger was the PM who steered the Act of Union through.  Indeed, this act of tyranny is more or less the reason why the street was renamed!)
Pitt Street, although in a very fashionable quarter of Dublin, just off the Green, is and always was very small.  It was only created after Harry Street- in more recent decades home of the excellent McDaid’s pub, (a former haunt of mine) was extended and driven through to the newly- created Chatham St.  Chatham Street is in turn a widened and improved version of the former tiny “Gibbs Lane”.  This is how much Dublin was changing in the late 18th century.  All the time.  Partially because of the extraordinarily powerful Wide Streets Commission, yes.  But more generally, also as it was simply a time of strong growth and development and finally, of changing tastes in architecture and thoughts on city planning.

As you see below, the old, now-vanished Gibbs Lane, directly off Grafton Street is visible in the earlier, brilliant Roque (monochrome) map from just 42 years earlier, 1756.    Today a longer version of Gibbs Lane is Chatham Street.

And as for the small lane former known as Pitt?  Well, it hosted the premises of the most celebrated Madame of Georgian Dublin, Mrs Leeson, sometimes known as Peg Plunket.  Her famous bordello was more or less where the Westbury Hotel stands today.

Mrs Leeson was a brilliant, resourceful woman, a celebrated wit and uncommon spirit. Here she is, posing for a portrait, very much knowingly and tongue-in-cheek, as the huntress and virgin Roman Goddess Diana. 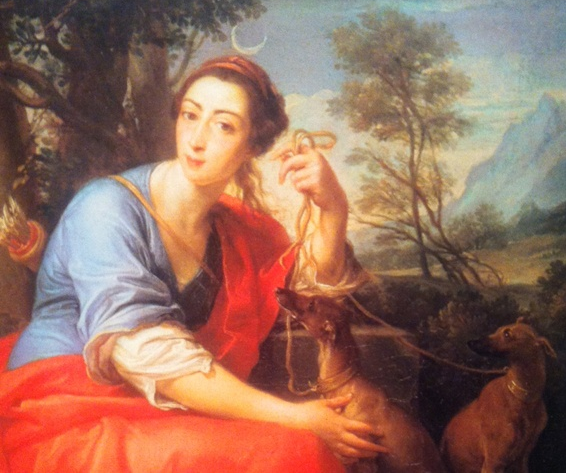 I mean to write about her soon, in another context, although I cannot improve here upon this superb description, itself written almost in Regency-ese! It is from by Lilliput Press, introducing their modern, reprinted edition of Peg’s memoirs…

Mrs Margaret Leeson (1727-97), alias Peg Plunket, of Killough, Co. Westmeath, was the best-known brothel-keeper of eighteenth-century Dublin. As well as the rich and titled (a Bank of Ireland Governor and a Lord Lieutenant were among her clients), she accommodated lawyers, conmen, journalists, theatre-folk and petty villains. Her first establishment, run in partnership with friend and fellow-courtesan Sally Hayes, was in Drogheda Street, until vandalized by the Pinking-dindies. She then moved to Wood Street, before settling, most notoriously, in Pitt Street, on the site of the present Westbury Hotel.

She led a colourful, if rackety, existence as leader of Dublin’s demi-monde, accepting early in her career 500 guineas from Lord Avonmore to discontinue her brief marriage to his gormless son. She refused service to the Earl of Westmorland because he treated his second wife ‘shabbily’, and insulted the Prince Regent twice whilst visiting London. After thirty years she decided to reform but found her cache of IOUs valueless and ended up in a debtors’ prison, run by a former client, Captain Mathews. To raise cash she decided to publish these memoirs, documenting her life as a madam and the vicissitudes of her retirement.

You can find a couple of Madame Leeson retorts and ripostes, on the excellent Women’s Museum of Ireland site.

As for the re-published memoirs of Peg herself, much like the original imprint, i fear the modern edition also may have sold out.  But who knows?   One can enquire.  In any event it’s always worth looking at the site of the excellent Lilliput Press.

For those with a taste for 18th century Dublin style, architecture, history, and even music, Dublin Decoded leads four tours on Georgian Dublin over the next three month , three of which have lovely music attached.  Educational tours, for Art History Leaving Cert are also still available, up to the Leaving Cert in late May.  (There’s a question on Georgian every year on the paper)   Detail of all that stuff, and an awful lot more,  can be found by having a dam good thorough root about the site, starting at the home page, and then clicking lots of other links and pages.  Or an easy alternative route to tour go-aheads, as always, is our monthly mailing list now.  First bulletin of 2015 goes out next 5 days.   So sign up, and join the demi-monde!   Adieu for now.